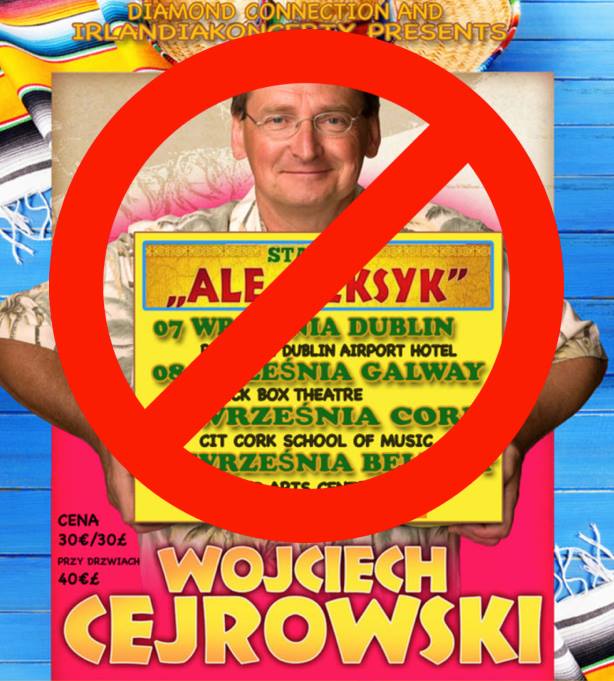 Amach! LGBT+ is planning to protest the performance of comedian Wojciech Cejrowski, known for homophobia in his material, at the Black Box tomorrow.

In calling for a protest, Amach have said of Cejrowski, “He’s not just homophobic; he equates people who are gay to paedophiles and openly calls for them to be attacked. He is also anti-choice and thinks people who provide abortions should be shot.”

The LGBT+ rights organisation have said they’ve asked the Town Hall Theatre, which governs the Black Box, to cancel his performance.

Cejrowski is well known for attacking LGBT+ people in his native Poland, where he has made frequent violent comments to the media about them, women, and abortion.

We contacted the Town Hall Theatre theatre and they said they did receive a complaint last week about the show and contacted the promoter.

The show will be about Mr Cejrowski’s travels in Mexico, the promoter told them, and will not touch on any political or religious themes.

In the interim several groups, including Amach!, have contacted the theatre to express their concern, and the theatre have said that those concerns were passed on to the promoter.

The theatre also added that there is a signed contract in place and a the rental fee for the Black Box theatre has been paid in advance by the promoter.

Another performance by Cejrowski scheduled to take place at the CIT School of Music next week has been cancelled by the Students’ Union there this afternoon.

The cancellation came after protests against his appearance by Cork Pride.

Cejrowski’s appearance is Galway tomorrow is part of a tour of Ireland. Aside from Cork, is also appearing in Dublin and Belfast.

His gig in Galway is on at the Black Box Theatre on the Dyke Road at 8pm, where  Amach! LGBT+ plus plans to be out in protest from 7pm – 10pm.

“This homophobe is not welcome in Galway and on Saturday we plan to show him that.”