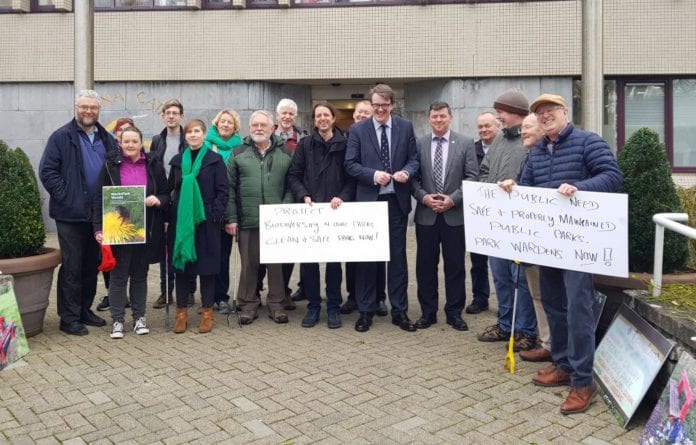 A group of 20 demonstrated outside Galway city hall earlier today calling for the creation of dedicated park wardens for Galway city.

The protest was urging councillors to support a motion proposed by councillor Mark Lohan to create a designated council workforce dedicated to cleaning Galway’s parks on a daily basis.

The councillor said that there is a serious problem with rubbish at Merlin Park and Terryland Forest Park.

“At a recent community cleanup I and others from the community picked up 59 bags of rubbish from Terryland Forest Park in one two hour period.”

“That didn’t build up over one day or even one week, there’s been a lack of cleaning at those facilities since the Gateway Scheme ended.”

He added that because of several retirements at city hall, new posts dedicated to cleaning public parks could be created at no extra burden to taxpayers.

Councillor Lohan added that the protest was doing a great job illustrating how litter is damaging local amenities.

The motion was on the agenda for today’s meeting, but because of a crowded schedule had to be deferred to a special council meeting on February 4.

Local environmentalist and activist organised the protest, which was supported by the Friends of Merlin Woods.

“We are a green and blue city like no other city in Ireland,” Brendan said.

But he said they are being inundated with rubbish of all descriptions.

“And they are not in hidden corners of our parks they are at the entrances to our parks,” Brendan added.

“You can see broken seats and benches that haven’t been fixed or replaced in months if not years, you can see the river being contaminated by rubbish going in.”

Mayor of Galway Niall McNelis spoke with the demonstrators attending the protest and gave his support for the creation of park wardens.

He promised that it would be on the agenda for debate at the meeting on February 4, and that he didn’t think any councillor would be opposed so long as the resources are there.

Councillor Lohan also praised the protest, “This is the public petitioning their local government.”

“They’re here to educate their councillors as they walk in which is valuable.”

Brendan Smith told people attending the protest that it was up to them to petition individual councillors to ensure their support between now and then.