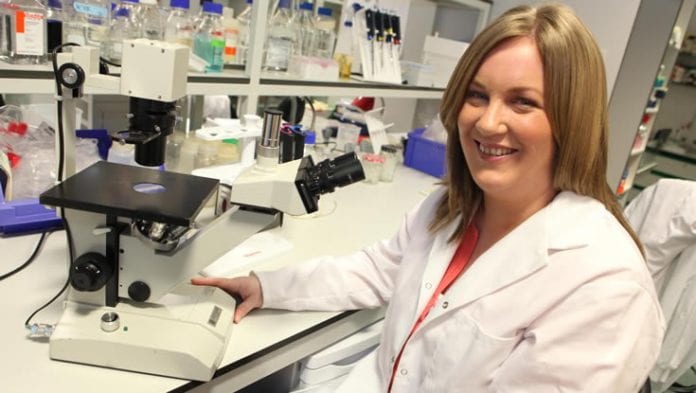 New NUI Galway research has discovered that a protein called iNOS in the body is a key cause for the aggressive spread of triple negative breast cancer, which results in increased risk of early death from the disease.

The findings from the research led by Dr Sharon Glynn found that inducible nitric oxide synthase or iNOS made cells more resistant to treatment such as chemotherapy and caused a spread of the cancer.

The study was conducted by the Discipline of Pathology at NUI Galway’s Lambe Institute for Translational Research, and were published in two international journals, examining the role of iNOS and another protein COX2 in this type of breast cancer.

iNOS and COX2 are normally activated when the body experiences inflammation and wound healing.

Dr Glynn’s research shows that when both proteins are expressed together in triple negative breast cancer, they lead to faster tumour growth and help the tumour to spread around the body.

Almost 30% of women in the Western world are diagnosed with this form of breast cancer, which currently cannot be treated or stopped with therapies such as tamoxifen and is limited to treatment through chemotherapy and surgery.

Triple negative breast cancer, the most aggressive form of breast cancer is frequently diagnosed in younger women ranging from their thirties and upwards.

In the first study, published in Oncotarget, Dr Glynn and her NUI Galway colleagues Dr Pablo Garrido, Dr Aideen Ryan and Professor Grace Callagy found that women with increased expression of iNOS were at greater risk of their breast cancer spreading to other parts of their body, leading to poor survival rates.

They conducted a study of 206 women across the Western seaboard diagnosed with breast cancer at Galway University Hospital between 2000 and 2016, and found that iNOS was a factor in the poor survival rate of Irish breast cancer patients with triple negative breast cancer.

It made the cells more resistant to treatment such as chemotherapy, aiding in tumour cell growth and a much higher risk of the disease spreading, leading to death.

Speaking about the research, Dr Sharon Glynn at NUI Galway, said: “The results from both studies will be used to develop screening methods to identify which patients are at increased risk of developing the lethal disease.

“The team are also focused on developing new therapeutic drugs that shut down both of these proteins and reduce the spread of cancer which can lead to premature death in the future.

“Both proteins have been identified as key drivers in the spreading or metastasis of triple negative breast cancer, and targeting them may save the lives of these patients.”

The second study, published in Proceedings of the National Academy of Sciences was edited by the Nobel Laureate, Dr Louis Ignarro, a world expert in nitric oxide biology.

Dr Glynn collaborated with Dr Debashree Basudhar and Dr David Wink at the National Cancer Institute in the US and demonstrated for the first time that patients who express high levels of iNOS in conjunction with high levels of the protein COX2, are at an increased risk of tumour progression throughout the body and high risk of death. The study was carried out with patients from Maryland in the US.