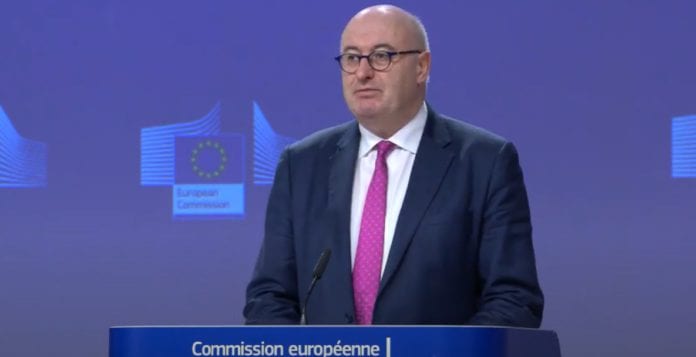 Phil Hogan is expected to resign as an EU Commissioner tonight amid mounting pressures from all sides over his attendance at a golf society dinner in Clifden last week.

Hogan was one of the most high profile guests at an event organised by the Oireachtas Golf Society in Clifden which was attended by 81 people, in breach of limitations on the number of people allowed at gatherings.

On Tuesday Hogan submitted an itinerary of his movements in the days surrounding ‘golfgate’ to President of the EU Commission Ursula von der Leyen, who was considering his fate today.

The Irish Independent reports that sources in Brussels have confirmed that Hogan will instead offer her his resignation tonight.

There has been particular public ire directed at Hogan over the seemingly combative and evasive statements he has made in the past week as fresh revelations have emerged about his movements in the days around this event, and how they may have breached COVID-19 restrictions.

Hogan, who arrived from Brussels on July 31, claimed that he did not need to complete the quarantine period as he received a negative test result for COVID-19 while in hospital on August 5.

However, the Department of Health quickly contradicted that claim, saying this did not apply to people arriving from outside of Ireland, from a country not on the green list.

This also contradicted an earlier statement by his spokesperson, who said that he had completed the required isolation period.

In a joint statement yesterday, the three heads of the coalition government Micheál Martin, Leo Varadkar, and Eamon Ryan, said that Phil Hogan has “undermined public confidence” by his “delayed and hesitant” release of information.

Eamon Ryan went further than either Varadkar or Taoiseach Martin by saying that Phil Hogan had lost the confidence of the government through his actions.

Leo Varadkar had earlier said that Hogan should “consider his position”, but as an EU Commissioner, the decision on whether to remove him if he did not resign would ultimately reside with Dr von der Leyen.

Sinn Féin's support has surged by 3 points to 30% in the latest Red C/ Sunday Business Post poll published today, which is the...
Read more
POLITICS

How Twitter could help Donald Trump hold onto power in 2020

As we edge closer and closer to polling day, a nation remains split on who will lead America as President for the next four...
Read more
POLITICS

PBP Galway meeting to look at solutions to the housing crisis

People Before Profit Galway will host an online public meeting this week looking at solutions to the housing crisis and the redevelopment of several...
Read more
Facebook
Twitter
Pinterest
WhatsApp