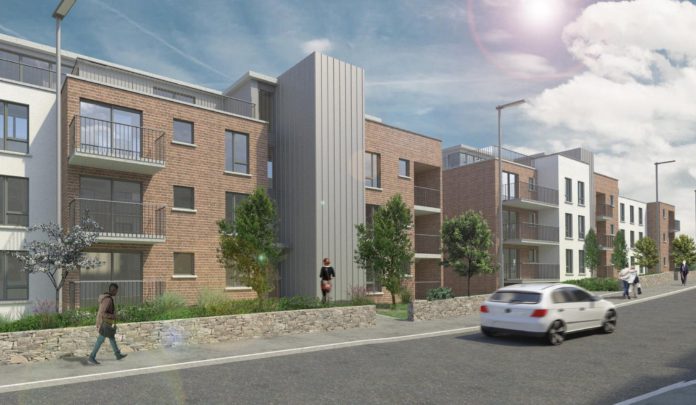 Sathel Limited are seeking planning permission for a housing development on the Monivea Road in Galway City, which would consist of 102 homes and a creche.

The 1.46ha site is located between the Monivea Road and Ballybane More Road, in between the existing An Luasan and Dun Briosta estates.

The development would consist of 13 semi-detached houses, in a mix of two, three, and four bed units; 34 duplex units ranging from one to three bed homes; and 55 apartments in two separate blocks.

Each of the proposed apartment blocks would be a five storey building on the Ballybane More road end of the site.

In order to fulfil their Part V planning requirements, Sathel is proposing that 10% of the units would be transferred to the city council for affordable or social housing.

Cars would access the site from a new entrance on the Monivea Road, and a pedestrian entrance would also be created at the Ballybane More Road, along with the installation of a pedestrian crossing on the same.

The plans include 94 car parking spaces, four of which are designated for the creche, and the remainder are for residential use. This is significantly below the 238 which would be required by the city development plan.

The application states that the Design Standards for New Apartments (March 2018) “supersede” the city development plan when it comes it comes to parking provision.

It is argued that reduced parking provision is appropriate due to the site’s proximity to public transport bus routes.

The plans also include 2,130m² of public open space, just over 15% of the area being developed, most of which is green areas in the centre of the site, which includes a children’s playground.

Two consultation meetings were held between the developer and the city council in July and September of last year, and a final meeting involving them and An Bord Pleanála took place in February, before this SHD application was made.

The pre-application consultation is a requirement in a Strategic Housing Development, which allows for the planning application to be made directly to the higher authority.

A Natura Impact Assessment and Archaeological Assessment were submitted with this application, documents for which are available at https://www.sathelballybritshd.com/.

An Bord Pleanála is due to rule on this application by October 11 of this year.