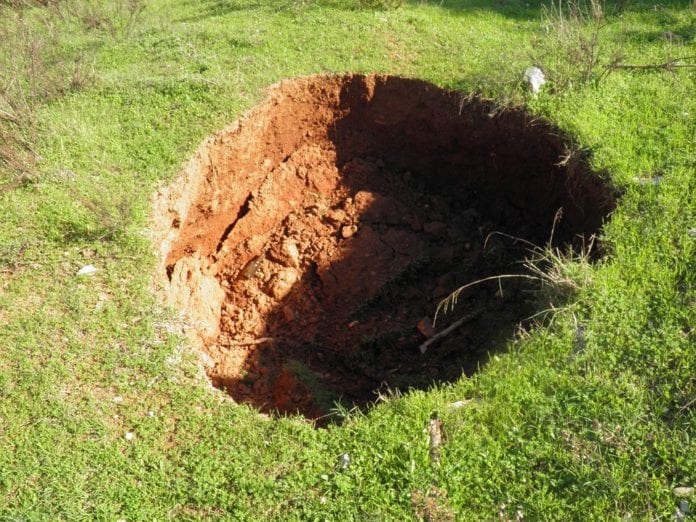 A large amount of the buildings across Galway are in an area that’s at high risk from sinkholes and other subsidence events, a location intelligence software company has found.

Using its risk assessment tool Perilfinder, Gamma claims that more than a quarter of Galway’s structures are in a high risk zone for subsidence events.

Subsidence occurs when the earth sinks unexpectedly beneath our feet, often destroying buildings and infrastructure.

Sinkholes are one of the most dramatic examples of subsidence, and the lack of warning before one opens up can make them highly dangerous.

According to the Engineer’s Journal Clare and Roscommon were also identified as being vulnerable, with more than 15% of buildings in a high risk zone.

Just last week, a GAA pitch in Monaghan was destroyed by a sinkhole, leading Gamma to identify what other areas were at risk.

CEO of Gamma Fergal O’Neill said “Sinkholes are extreme cases of subsidence and they are rare in Ireland. However, the consequences can be devastating.”

“Thankfully, the recent land collapse on a GAA pitch in Co Monaghan didn’t result in any injuries; however, the sports field was damaged, the school had to be evacuated and surrounding roads were closed.

“Situations like this can cause significant damage and people can end up seriously hurt,” he added.

While Galway is an extreme example, overall Gamma found that sinkholes aren’t a major threat to most of Ireland.

Wexford and Wicklow have just one percent of their buildings in an area at serious risk.

Across Ireland less than five percent of structure are built within an area that’s in danger from sinkholes.

“Subsidence is more common and it can affect all kinds of buildings, resulting in costly repairs,” Fergal O’Neill said.

“The key, therefore, is prevention. This curated Irish data can be used by organisations, including insurance companies and local authorities, to assess existing threats and lower the risk.”