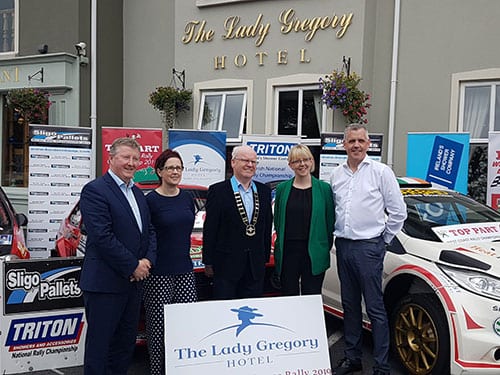 More than 125 entries have been received so far for the Lady Gregory Hotel Galway Summer Rally, which will be held later this month.

The Lady Gregory Hotel is the headquarters for the rally, while Gort Mart will be the location for the service area and scrutiny will take place at Top Form on the Tubber road.

Among the entries received to date are Josh Moffett, Hugh Hunter, James Stafford, Frank Kelly and Gary Kiernan.
Josh Moffett is in a commanding position and only needs a top eight finish in Galway to be crowned national champion for 2019.

Clerk of the Course Aiden Connolly has laid out a 3×3 format, which includes some classic roads not used in a number of years.

Minister Sean Canney launched the rally in Gort at the weekend and said that he hopes everyone will turn out to support the event.