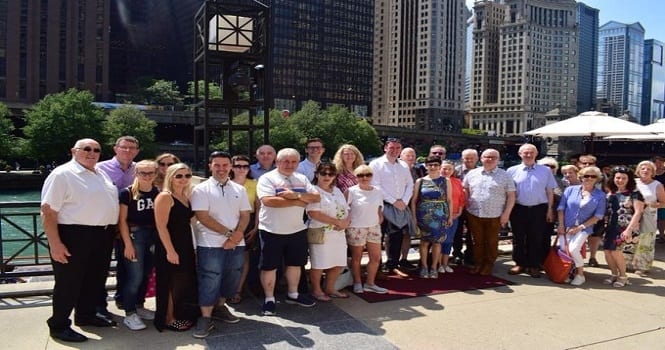 Mayor of Galway Mike Cubbard is currently leading a delegation from Galway to our sister cities in the US, Chicago and Milwaukee.

On Tuesday the mayor attended a reception hosted by the Chicago Galway Sister Cities Committee at which the late Bill Gainer, for many years Chairman of the Chicago Committee, was remembered.

Mayor Cubbard presented gifts to Bill’s wife, Geri, and daughter, Nora, who led the delegation on a whirlwind tour of the Art Institute of Chicago.

While there he also met with other local luminaries including Dr. Scott Stewart, Executive Director of Millennium Park; Senator Billy Lawless; Michael Amiridis, Chancellor of the University of Illinois and members of the Galway/Chicago Sister City Committee.

The delegation will go on to represent Galway and the European Capital of Culture project at the Milwaukee Irish Fest getting underway tomorrow.

It’s hoped that the visit will strengthen ties and develop connections between Galway and its Sister Cities going forward.