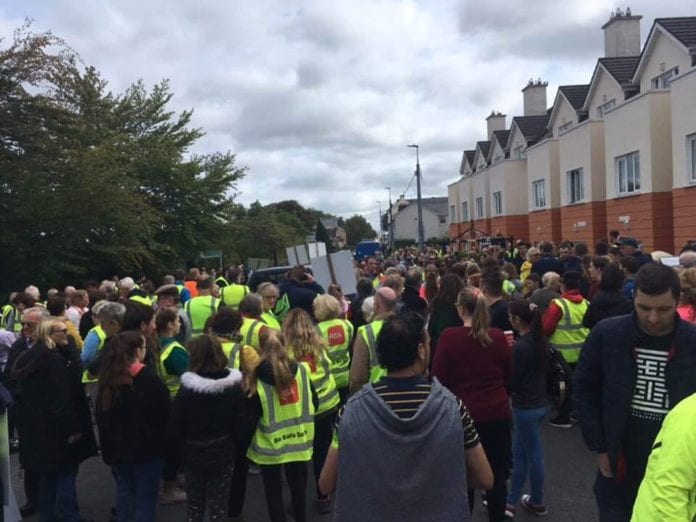 A protest march in Oughterard today against the establishment of a Direct Provision centre in the town was attended by roughly 1,000 people.

Locals have also expressed frustration with the lack of information about ongoing work at the Connemara Gateway Hotel and coming from the Department of Justice about the possibility of a Direct Provision Centre.

That frustration was evident at a public meeting this week where over 800 people attended, expressing frustration over lack of public consultation on any migrant centre plans.

During the meeting Galway West TD Noel Grealish said that asylum seekers from Africa are economic migrants who are coming to Ireland to sponge off the system.

The Galway Anti Racism Network said that it “Stands with those who marched in Oughterard this morning against the inhumane direct provision system and how it treats asylum seekers.”

In a statement the group said that “We stand with those who highlighted the lack of resources and infrastructure in the area and how the community are not being consulted about new developments in their area.”

GARN added that it was concerned about “outside actors” with an anti-immigration agenda infiltrating this local protest movement.

The group said that “fear and hysteria” is being whipped up which is sidelining the legitimate concerns of Oughterard locals.

The network also repeated its call for Deputy Grealish to apologise for his remarks at the meeting.