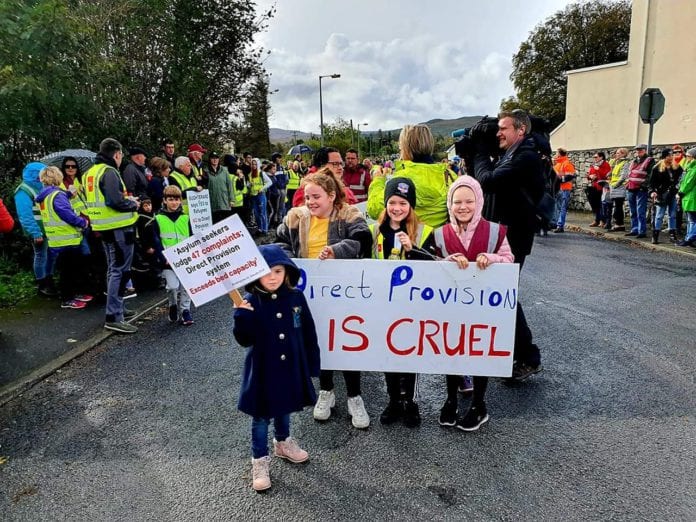 In a rare victory for local opposition to government plans the decision to place a direct provision centre in Oughterard has been abandoned.

It was announced today that a tender for a contract to develop a direct provision centre in Oughterard has been withdrawn by the applicant.

It’s understood that the decision was made by Fazyard Ltd, the company applying for the tender, after recent meeting with the Department of Justice and the current owner of the hotel.

Patrick Curran of the Oughterard Says No to Inhuman Direct Provision group said that this is a victory for their community, the country, and all the people who come to Ireland seeking a new life.

“We have not only cancelled the centre in Oughterard we have made a positive change for the people of Ireland and also for the asylum seekers themselves.

“This started out as a village opposed to a DP centre but in ended up as a village finding its voice and standing up for an entire nation on behalf of democracy and humanity. We stood up for the people that had no voice.”

Mr Curran said that there were left-wing and right-wing people who were trying to hijack the campaign for their own purposes but “we pushed them all out in the early days”.

“People united around one message, which was the humanity of it really,” Patrick Curran added.

At first people were angry about the secrecy under which this process was taking place, but a deeper look into the system provoked “complete moral opposition to the inhumanity of direct provision”

Patrick thanked developer Sean Lyons for listening to the community in Oughterard, admitting that it can’t have been an easy decision to make.

Wide opposition to any plans for a direct provision centre in Oughterard has built up over recent weeks.

A public meeting in early September to discuss the issue attracted somewhere in the region of 800 people, and a follow up march through the town centre that weekend was attended by roughly 1,500.

That was followed up by another silent march through the town to the Connemara Gateway Hotel on Saturday where up to 3,000 people attended.

In between major marches campaigners have maintained round the clock protests outside the entrance of the Connemara Gateway Hotel.

Throughout this campaigners have been unbending on the front that this is not and has never been a protest against immigration or refugees, but against the direct provision system which has been characterised as “inhumane”.

Demonstrators from the ‘Oughterard Says No’ group at those marches or on the picket lines of the Connemara Gateway Hotel have carried placards which read ‘Oughterard says yes to refugees, no to direct provision’

Recently the Bishop of Galway also came out in opposition to the plans, saying that direct provision strips people of “their independence, their cultural identity, and their dignity and has lasting traumatic impact on residents”.