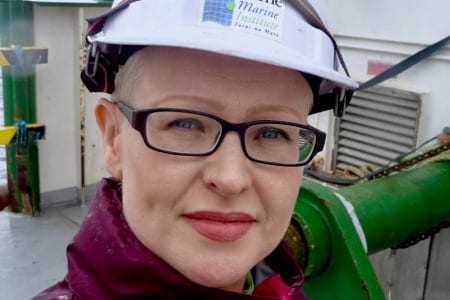 Ailís Ní Ríain, a contemporary classical composer and writer, spent three weeks at sea this August on board the Marine Institute’s RV Celtic Explorer searching for inspiration in new places.

The multi-talented artist, who was aboard the Celtic Explorer as part of the Aerial Sparks project, described the experience at sea as “unique on every level: physically, spiritually, emotionally, mentally.”

Aerial Sparks is an interdisciplinary art project with Galway 2020 that has seen many artists from Ireland and abroad spend time at sea with the Marine Institute exploring radio connectivity and its relationship to ocean space.

Ailís that when she was offered the invitation to take part in Aerial Sparks it was the “boldness of the idea” that resonated with her.

““I loved the fact that I couldn’t really renegotiate with it in any way. You need to go to sea and you need to be completely in that situation.”

“You’re signing up for something that you can’t know in advance and that doesn’t often come up for me,” she explained.”

The expedition she joined was a milestone on for Galway’s Marine Institute, marking the end of a three year investigating and mapping coral reefs off the shores of Ireland.

During its time exploring the depths of the Irish continental shelf the remotely operated RV Holland I submersible found incredible things like a baby shark nursery and reefs thriving in old shipwrecks.

But while the research team was no doubt focused on every minutia of their mission, when watching the RV Holland disappear beneath the waves time and again Ailís was struck by something more classical.

“Greek mythology wasn’t far from my mind, the idea that something that we remotely operate is sent down to the ‘underworld’ and the experience he has down there.”

During her time aboard the Celtic Explorer Ailís kept a daily diary, filmed extensively and took over 1900 photographs, all of which will be used to inspire and create an immersive standalone art project for Aerial Sparks.

Ailís is keen to work with visuals as well as music in developing the piece, saying she’s “interested in what happens when you don’t give an audience what they’re expecting in terms of connecting music with visuals.”

For Ailís, creating work as part of the European Capital of Culture programme is an important consideration in itself.

“There’s a lot that I’ve witnessed on the survey about what it means to work at sea that I didn’t know about, that those who live and work on the land wouldn’t generally know about. I hope I can bring some of this experience to a broader audience.”

Aerial/Sparks will be presented on the island of Inis Oírr in September 2020.