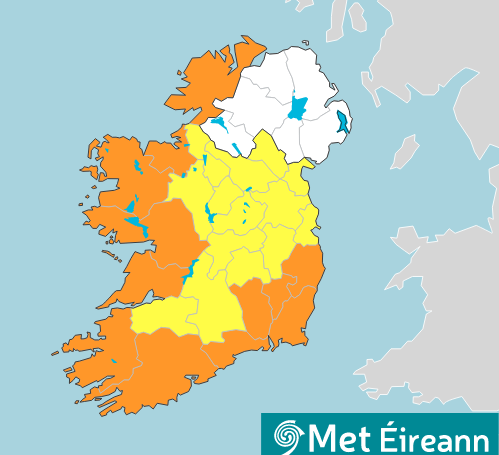 A Status Orange weather warning has been issued for Galway for tomorrow as Storm Aiden is expected to bring “severe and damaging” winds.

The Status Orange wind warning for Donegal, Galway, Mayo, Sligo and Clare will be in effect from 8am to 4pm on Saturday.

During that time strong southwest to west winds associated with Storm Aiden will reach mean speeds of 65 to 80km/hr.

Winds will at times reach even stronger speeds on Saturday, with gusts of up to 130km/hr forecast during Storm Aiden.

A separate Orange warning has been issued for Carlow, Kilkenny, Wexford, Wicklow, Cork, Kerry and Waterford, which will end earlier in the day.

Met Eireann has also issued a Status Yellow wind warning for all of Ireland from 1am to 3pm on Saturday.

This entire Halloween weekend has been predicted by Met Eireann to bring stormy weather due to a series of “vigorous Atlantic weather systems” passing close to Ireland.

A weather advisory for possible river and coastal flooding due to heavy wind, rain, and high seas will be in force from 9pm tonight until 8am on Monday, with more weather warnings possible throughout the weekend.