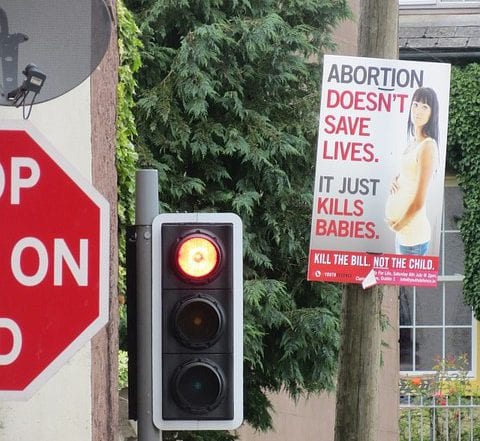 Over recent weeks, if you headed out for your jog along the Prom, what did you see?

If you drove in to work from Barna, Moycullen, or Oranmore what did you see?

If you looked along virtually any road, path or wall, what did you see?

Posters. Thousands and thousands of them.

As anyone who hasn’t been living under a rock would know, these posters were for the referendum on repealing the eighth amendment in the Irish constitution – a hugely important issue to so many of us.

But what happens to all the posters now?

Well, my kids enjoy making forts out of them, and one or two may end up in museums or private homes as souvenirs, but the vast majority will go straight off to landfill.

This comes at a time when Ireland is struggling to dispose of the mountains of plastic we all use. The last thing we need is thousands upon thousands of large, plasticised ‘corflute’ posters, made of a material which is nonrecyclable and lasts essentially forever.

It’s not just the posters which create waste. The cable ties used to fix them to poles or lampposts are also made of plastic. These smaller pieces of plastic waste often end up in our oceans, causing terrible harm to any wildlife who ingest them.

It’s not like we haven’t acted to restrict advertising around referenda before. We were able to ban Facebook and Google ads during the Repeal campaign, due to questions over the source of funding.

The world has moved on. We’ve now got the internet, social media, and text messaging, along with television, radio, and newspapers. These are all places where we can debate and put forward points of view without creating mountains of plastic waste.

Also, there’s a strong element of visual pollution. Many parents complained about having to explain graphic posters to young children during the referendum. Other people may simply not want to be confronted with a sea of brightly coloured advertising on every surface the moment they leave their home.

The Green Party’s proposal is simple: Create a designated space in each city or town where both sides can display their posters. In Galway City this could be Eyre Square, and the equivalent in our other towns and villages.

This idea is nothing new in Europe. France, Italy and Spain already have restrictions like this in place. In Scotland, where very few councils allowed posters for the last UK general election, voter turnout actually increased.

Communities here in Galway are already asking for this. Schools, for example, asked posters to be removed from outside their premises, and posterers were happy to comply.

Galway City and County Councils have the power to make this change. Councils are in charge of the bye laws that govern election postering.

Restricting political posters to specific locations means we’ll allow all points of view a fair hearing, but keep plastic waste to a minimum. I call on our councillors across Galway City and County to make it happen.