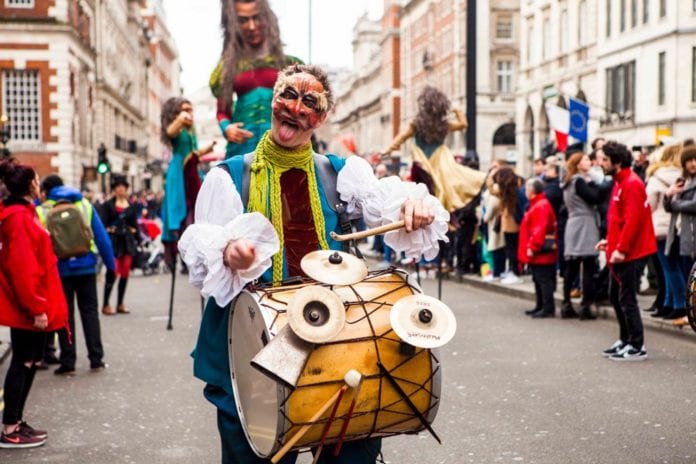 An open audition workshop will be held on Sat 24th of February from 12pm – 2pm at the Macnas workshop in Fisheries Field, on the grounds of NUI Galway, with 15 places available. The auditions workshop will be led by drumming instructor Éimhín Cradock and Macnas musical director Orlagh de Bhaldraithe.

All attending the workshop are asked to bring one drum that bests suits their style of play e.g. snare, tom, floor tom.

Those successful in the auditions will be invited to attend weekly rehearsals with a view to performing with Macnas during the annual Hallowe’en parade in Galway, as well as joining the company for performances across Ireland and the world.

The troupe will meet weekly at 8pm on Tuesdays at Macnas during term time and a full commitment is required from those joining the troupe.

Éimhín Cradock has taught hundreds of drum students over the past 15 years. He studied under the original drum adviser to Macnas, Mike Arrigan.

Éimhín currently runs his own drum group called Drumadore who are known for their drumming at Connacht rugby matches and many other local and regional events.

He also toured the world with the legendary Saw Doctors and has recorded with many bands such as the Whileaways, The Latchiko’s, This Nachez, EDFT and many more.

As Musical Director for Macnas, Orlagh De Bhaldraithe has written the musical narrative for numerous outdoor spectacle shows, both in Ireland and internationally, including soundtrack composition and engineering community ensembles for live performance.