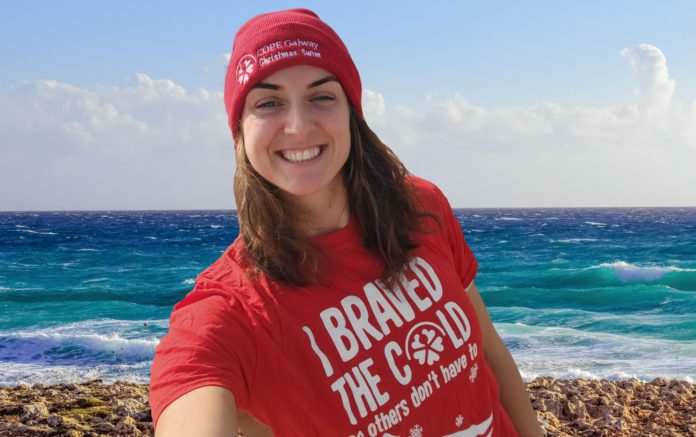 The rower has been dipping in Salthill every year since 2011, along with fellow rowers, friends and family members.

Speaking this week from her winter training camp in Sabaudia, Italy, Fiona said that as life becomes so busy, and friends, including herself, reside outside of Galway, they may not see each other from one Christmas to the next.

She said that getting to see everyone at the swim on Christmas Day has become a tradition she looks forward to each year.

Fiona Murtagh recalls the original foursome back in 2011 – her junior rowing coach Rory O’Brien and his daughter Meabh would collect Fiona and fellow teammate Ruth Cummins at around 10am Christmas Day.

“We’d drive to Blackrock for the swim, then stop for coffee on the way home. As the years progressed, other teammates would either join us for the swim or come meet us at Blackrock to say hello,” she said.

“It became a lovely opportunity to meet friends on Christmas Day, while supporting such a wonderful organisation as COPE Galway.”

You can register online for the COPE Galway Christmas Swim to “swim where you are” any time between 20-26 December or to attend a “wave” at the Blackrock event on Christmas Day between 9am and 1pm. To register and for further information and safety tips, visit copegalway.ie/swim or phone 091 77 87 50

The annual event Galway raises essential funds that have a direct and positive impact on the lives of vulnerable families and individuals in Galway.

COPE Galway’s Lynia O’Brien, who organises this annual community event said, they never cease to be bowled over by the local support for the Christmas Swim.

“This year, we see more work teams are registering, along with the traditional family, friend and school groups, to take on the challenge and brave the cold so others don’t have to.

“As Fiona indicated, facing the cold and wet together has become a great bonding experience!

“It’s also a reminder that while Christmas day is about being with people you love, it’s also about remembering and supporting the increasing numbers of people in our community who are struggling this winter.”