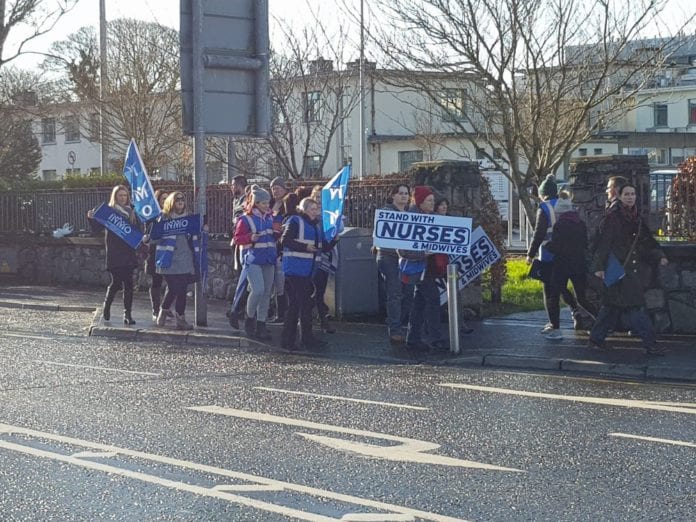 Nurses and Midwives and protesting outside University Hospital Galway today as part of a nationwide strike against pay issues.

The Irish Nurses and Midwives Oraganisation is leading 37,000 nurses on a nationwide strike that’s planned to be followed by several more.

Drivers passing the protesters on the junction of the Newcastle and Seamus Quirke roads honked loudly and frequently in support of the nurses.

This is only the second time in its 100 year history that the INMO has led its members on a nationwide strike.

Patients should avoid going to UHG today unless absolutely necessary, especially the emergency department, as nurses will only be providing essential lifesaving care.

On Tuesday the Labour Court declined to become formally involved in the dispute after eight hours of meeting late into Monday night.

The INMO is striking over pay parity issues which they say has lead to serious issues with retaining nurses.

Health Minister Simon Harris has refused to consider pay increases to nurses that fall outside of the general Public Sector pay agreement.

He said the Department of Public Expenditure would consider the issue of applying sanctions against INMO in the coming weeks.