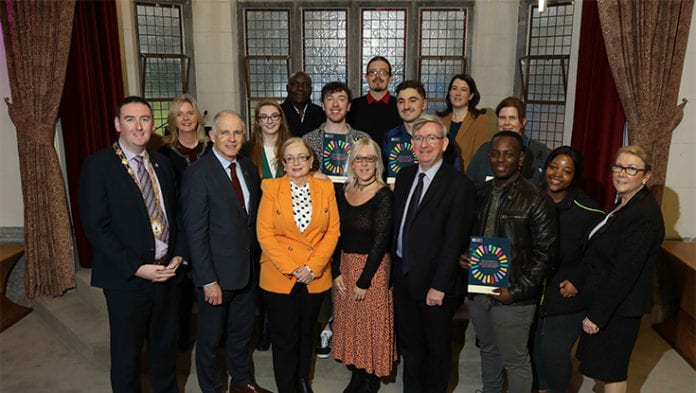 NUI Galway has welcomed its recent designation as a University of Sanctuary for promoting equal access to higher education and fighting discrimination.

The University of Sanctuary Initiative is the brainchild of Places of Sanctuary Ireland, a network of groups in local communities which share the objectives of promoting a culture of welcome and inclusiveness across Irish society.

In particular it seeks to encourage a welcoming atmosphere and provide opportunities for people seeking international protection in Ireland.

NUIG was named a University of Sanctuary in September, and celebrated that this week with a ceremony attended by Galway City Mayor Mike Cubbard, as well as Minister of State for Equality, Immigration, and Integration, David Stanton.

The University of Sanctuary steering committee at NUI Galway also includes the Irish Traveller community in its remit, with a focus on the promotion of Irish Traveller culture as an innate and positive element of Irish society, and to address the low levels of participation at second and third-level education amongst Irish Travellers.

President of NUI Galway, Professor Ciarán Ó hÓgartaigh, said they are committed to broadening access to higher education for under represented groups and promoting equality throughout the university.

“While we look at diversity in terms of race, ethnicity, culture, language, religion, and experiential upbringing, we look at people simply as people. Fellow human beings on a journey through life.”

“Education is key to supporting society’s development and it’s fundamental that our education system does its utmost to assist those most in need.”

“Students who have fled war, persecution, genocide, and many other human rights violations deserve our support.”

He added that such resilience should be rewarded, which is why NUIG was pleased to award eight University of Sanctuary scholarships in 2019.

Six of these scholarships are for undergraduate students, and two are for postgraduate work.

They include four scholarships in College of Science; two in Business, Public Policy and Law; one in Engineering and Informatics, and one in Arts, Social Sciences, and Celtic Studies.

In the academic year for 2018/19 there were 3,972 international students at NUIG according to the annual Equality, Diversity and Inclusion report.

They made up 8% of all undergraduate students and 28% of postgraduates. Just under a quarter of staff at the university are now international hires, with 110 countries represented on campus.