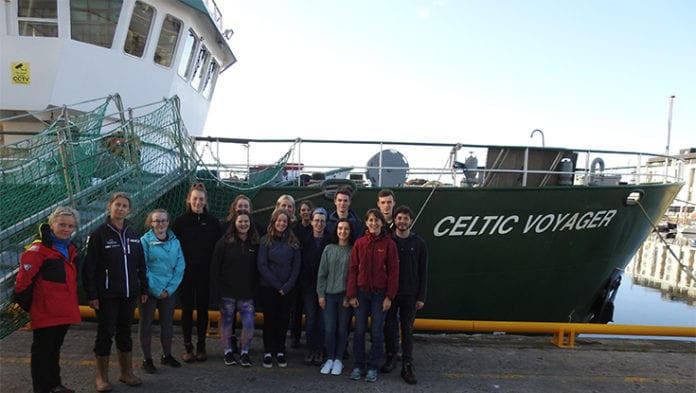 Scientists and students from NUIG’s Ryan Institute spent a day on the seas aboard the RV Celtic Explorer for Ocean Sampling Day 2019.

Ocean Sampling Day is a simultaneous sampling campaign of the world’s oceans by scientists globally to get a picture of their health.

Professor Louise Allcock, who is director of the Centre for Ocean Research and Exploration within the Ryan Institute, lead a team of four experienced scientists and 11 Marine Science undergraduate students.

Professor Alcock said that while aboard the Celtic Explorer they sampled and filtered water from the sea, and the filter papers are sent to a molecular lab in a marine station in Greece.

There, “all the DNA on the filter papers will be sequenced to give an estimate of what bacterial and invertebrate species are present in the ocean.”

She added that when the oceans are healthy they hold a “wide variety of species, an unhealthy ocean less so, and hence we get an overview of our ocean health.”

Ocean Sampling Day is organised by an EU consortium of marine research institutes, known as “ASSEMBLE Plus”, of which the Ryan Institute is part.

The students gathered their samples from directly above the SmartBay SubSea Cabled Observatory in Galway Bay.

NUIG’s Sheena Fennell, one of the experienced scientists in the team who has spent extensive time at sea, explained that trips like this are important first hand experience for students studying marine science.

“The students learn in their lectures all about the water column, the bacteria and inverterbrates living therein, and the specialised gears that we use to sample,” she said.

“But this is an opportunity for them to get genuine hands-on experience while contributing to an international research project.”

The students gathered their samples directly above the SmartBay SubSea Cabled Observatory in Galway Bay.

Professor Allcock said this ongoing project is a huge resource in monitoring ocean health due to the massive amount of varied data it gathers.

“The SmartBay Observatory provides subsea data all year round which means there is an enormous environmental dataset to complement our physical samples.”

There’s also a little big of bragging involved as taking samples there “affords us the opportunity to highlight this impressive infrastructure to our European colleagues.”