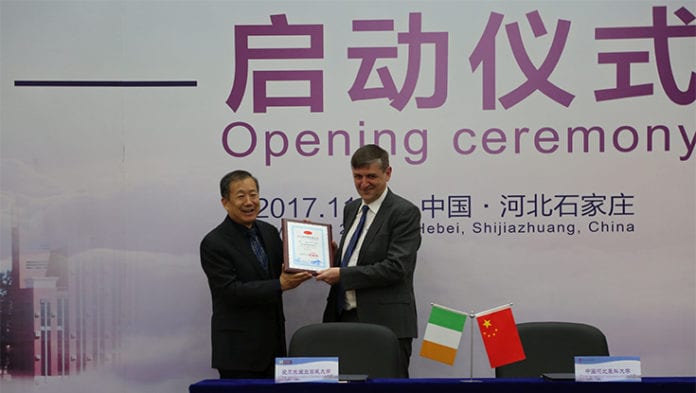 The stem cell research centre in Shijiazhuang, in the Hebei Province is focusing on developing treatments using stem cells for diabetes, musculoskeletal disorders and neurological disorders.

Scientists from both universities are collaborating on stem cell manufacturing and clinical trials for medical conditions in China and here in Ireland.

The centre was launched in November 2017 and had its first international conference at the end of last year.

Professor O’Brien commented that it’s important that people understand that many of the areas that use stem cells are still experimental treatments, not proven therapies.

“We need to undertake rigorously conducted clinical trials with carefully manufactured stem cells to ensure these therapies are safe and effective,” he said.

“We have invested significant resources in Galway to this end with the construction of a Good Manufacturing Practice facility for stem cell manufacture and a HRB Clinical Research Facility, which has special expertise in conducting early stage clinical trials in stem cell therapy.”

President of Hebei Medical University Professor Huixan Cui said, “Hebei Province has a population of almost 80 million people and many conditions which are common in Ireland are also causing much suffering to our population.”

“We are excited about this joint venture which we believe will be mutually beneficial and ultimately will serve the needs of patients.”

Five researchers from NUI Galway and the lead investigators on the Chinese side recently presented their plans to a scientific advisory board from the USA, EU and China which endorsed the research programme at an international conference.

On top of the stem cell research the two universities will be taking part in an exchange of staff and students.

Professor O’Brien said these exchanges are an important part of giving their students a concept of global citizenship.