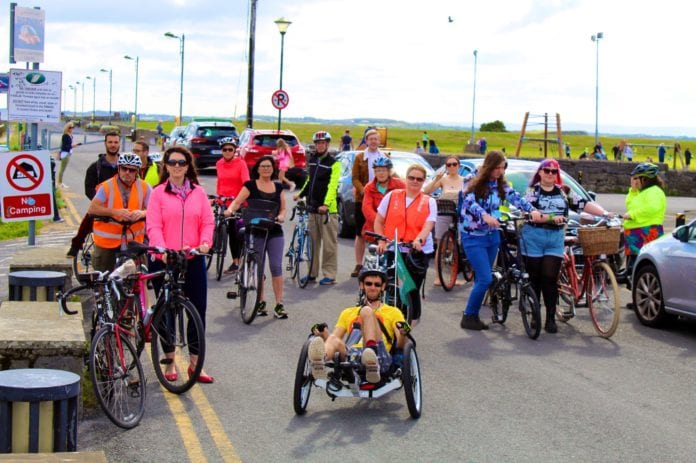 A new cycling project, designed to encourage people to use their bikes more, has held another successful event in Galway City.

Galway Cycling Campaign’s ‘CycleCoffeeCake’ wants to encourage people, especially women, who started to cycle or rediscovered the joys of cycling during Covid-19 lockdown, to continue to use their bikes for everyday trips around the city.

The second event on Saturday explored quiet routes away from the main roads,  by Grattan Road, the Westend, canals, and the city centre before ending at Bar Italia Ciarlantini in Woodquay.

The group included four councillors, a woman who had never cycled in the city centre before, and a person using a recumbent trike.

“One woman had a beautiful purple step through bike that she loves bringing on cycling holidays to greenways, yet she had never felt confident enough to cycle in the city before,” said organiser Martina Callanan.

“That was sad to hear – her love of feeling free and independent is overwhelmed by the reasonable fear of cycling on roads shared with buses, vans and trucks. We were delighted to show her calm streets and quiet routes that you wouldn’t be familiar with from driving.”

She added that Galway already is a cycling city, second only to Dublin in terms of the rate of people who bike to work and school – and said she believes that showing people routes that have lower traffic volumes will give them knowledge to cycle more safely to the shops and local cafés.

Ms Callanan also pointed out that the route had to be adjusted to accommodate a rider who uses an atypical bike.

“We couldn’t cycle the cycle path by the coastline behind The Swamp, as the kissing gate at the end of the pier would be unnecessarily difficult for the person using a recumbent bicycle.

This reclining bike is more comfortable for him to use than a standard upright two-wheel bike.”

There was another obstacle in that he wasn’t able to access the laneway between Woodquay and the Plots at the Dyke Road because there was a car parked in front of the entrance on the Woodquay side.

“A yellow box instead of a car park space would be a simple change and give easier access to people using various mobility devices,” said Ms Callanan.

The next CycleCoffeeCake events will take place on Saturday 1 August around Mervue and Roscam and then on Sunday 16 August in the city centre as part of Galway Pride.

Route and registration details will be available closer to the dates on www.galwaycycling.org