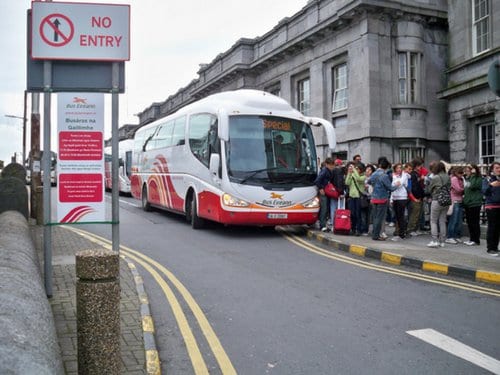 Bus Eireann is adding three new evening services on the Galway to Carraroe line at 7pm, 9pm, and 11pm from this September.

Currently, the last service Bus Eireann runs on the Carraroe line leaves the city at 6pm. This can be a problem for people who work in the city, but live out in Connemara according to Galway West TD Eamon Ó Cúiv:

“There are plenty of people who commute from west Galway into the city every day and it is not always possible for them to make the last bus at 6 o’clock in the evening,” he said.  “This forces them to drive to work, adding to congestion and increasing their journey time.”

As well as adding late night services up to 11pm, the number of daytime services along the same route are being increased to a bus every 30 minutes during peak hours.

Route 424 from Galway city to Carraroe also serves Barna, Spiddal, Inverin, Rossaveal, and Costelloe; with one service at 5pm going out even further, to Carna.

In addition to adding extra services out to Connemara, the Galway to Ballina route that goes through Castlebar and Westport is being split into three different routes.

Deputy Ó Cúiv says the new services out to Connemara are the result of intense negotiations, but that the only way to get more people using public transport is to have flexible timetables that meet people’s needs.

“The idea that the services for a city with a large work force, a university, an Institute of Technology and a major hospital would cease at 6 o’clock in the evening, is not satisfactory and I am very pleased with the engagement and support that I have received from Bus Éireann in trying to improve these services.”

Improving our public transport services, be it buses or trains, has long been acknowledged as the only effective way to address massive congestion problems in Galway city and take cars off the road. Roads infrastructure projects like the Gort to Tuam motorway have done little to ease traffic in the city to date.