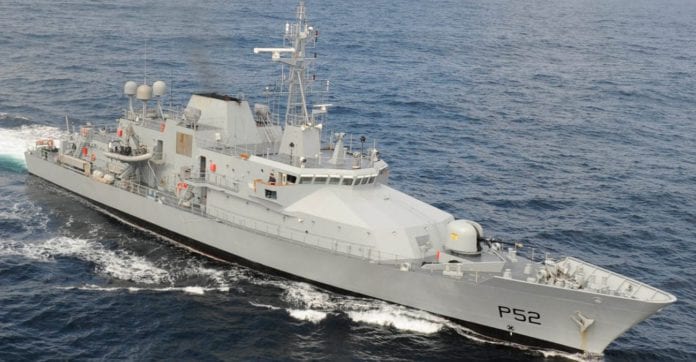 The Irish navy patrol vessel the LÉ Niamh is in Galway this week and is offering the public guided tours.

The LÉ Niamh will be alongside Galway this today and Friday, with the crew taking members of the public of the navy patrol ship between 1pm and 5pm.

The Niamh is the second Róisín class ship built for the naval service, built to the same long design as her older sister (78.8m) that optimises her performance in rough Irish waters.

While the name Niamh is not uncommon in Irish folklore, this ship is named for Niamh Chinn Oir from the story of Oisín in Tir na nÓg.

Patrol vessels in the Irish Naval Service take part in looking for illegal fishing ships and narcotics smuggling in Irish waters, along marine rescue missions and deployments to the Mediterranean to combat human trafficking.

The Irish navy is undertaking a recruitment drive to bolster its numbers, which stand at just under 1,100.

LÉ NIAMH (#P52) will be open to the public for guided tours by the ship’s crew alongside #Galway on Thursday 21st & Friday 22nd of March 13:00-17:00. @defenceforces is currently recruiting #joinourteam #ÓglaighnahÉireann pic.twitter.com/Qb7B7Mv9is