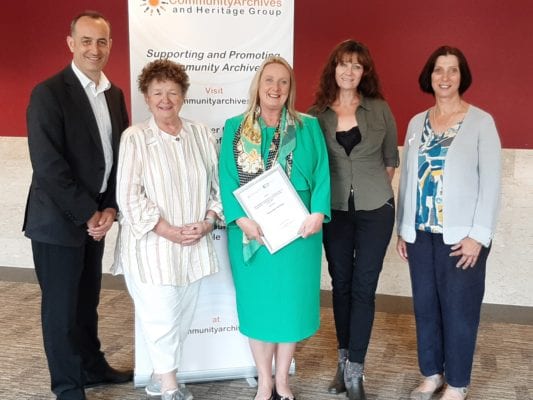 The highlight of the CAHG year is the prestigious awards ceremony showcasing work of community and heritage groups across England, Ireland, Scotland and Wales.

The society was formed in 1995 and named in honour of Ruaidhrí Ui Fhlaitheartaigh, the 17th century Moycullen born historian and scholar of international renown.

Their ongoing work is about is about preserving and conserving Moycullen’s rich visual, written and aural history

The group’s “stand out achievement” for these awards was publishing the book ‘Ruaidhrí’s Story – how Moycullen got its name’, which the judging panel praised for fostering an awareness and appreciation among local schoolchildren of Ruaidhrí Uí Fhlaitheartaigh.

Last year was the centenary of Mr O’Flaherty’s death, making this project a particularly timely celebration.

The judges said that they were “deeply impressed at such innovative and deliberate efforts to engage with wider communities and, particularly, in the way Moycullen Heritage engaged young people and schools and the model it has created that others may use.”

Together with Ms Lorna Elms (iCan and National Museum of Ireland Countrylife), Hazel Morrison of Moycullen Heritage co-presented a paper at the conference titled Bringing Home the Irish Diaspora: the Community Archive as Conduit, Connector and Catalyst at the conference.

Other categories  that awards were hand out in “Gathering Heritage”, won by Colourful Heritage from Glasgow and “Community Engagement”, which went to Maker Memories of Cornwall who were also the overall winners.