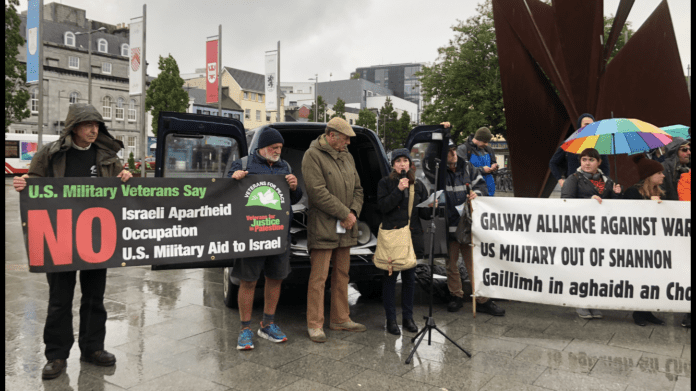 The rain did little to deter a gathering of protesters against US President Donald Trump in Eyre Square yesterday evening.

A number of people gathered in Galway City in what was described as an Anti-Trump protest to voice their opposition to the US president’s arrival in Ireland today.

The controversial president is due to arrive at Shannon Airport tomorrow where he will be greeted by Taoiseach Leo Varadkar. 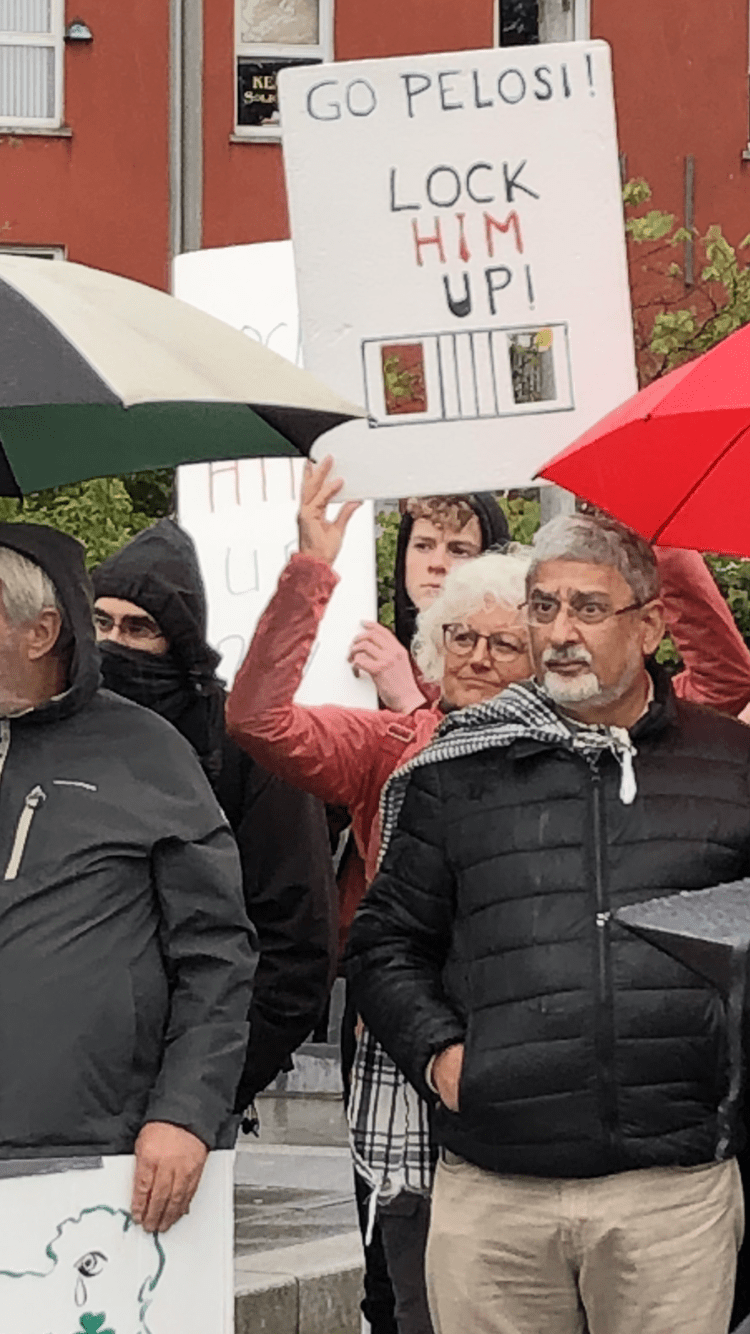 The US veterans for peace activist who is currently out on bail stated how he has been in Ireland for “almost three months now because your Government has my passport”.

He decried Trump as the individual who is in charge of “possibly the most dangerous government and dangerous military” that ever existed on the face of the earth.

Tarak Kauff labelled Trump as a misogynist and a racist. He than claimed he was a danger to the existence of the human race on this planet.

He claimed that Trump was an unstable man with his finger on the button and insisted that Leo Varadkar meeting this man was an embarrassment.

He claimed that if Irish people do this it will have ramifications across the globe. 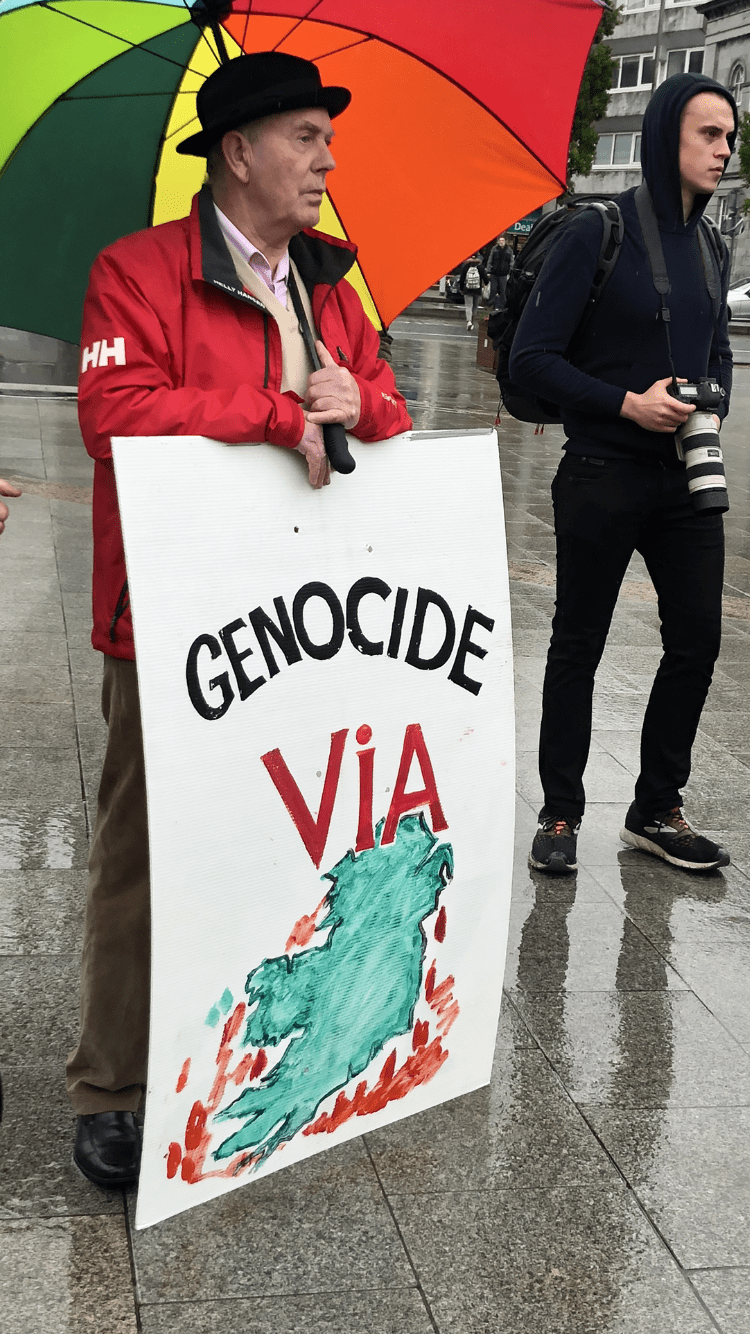 Galway based Poet Rita Ann Higgins was next to speak reading out a poem she wrote.

She said she was there because she cares about people and planet while Trump epitomizes emptiness.

Following the poetry reading was a speech from Will Griffin who served in the US military in Afghanistan and Iraq.

The US Army veteran claimed he carried a loaded gun through Shannon Airport unaware he was violating Ireland’s neutrality.

He went on the describe the US Republican Party as the most dangerous organization in the world while the Democratic Party was as dangerous because “it covers up its intentions all around the world”.

His speech was centred on describing the US military as a terrorist organisation, stating that the Army was “killing people in Iraq and Afghanistan not building schools and hospitals”.

He referenced the fact that Donald Trump wasn’t the president when the US got involved in Iraq, Afghanistan and Libya and how these are “long held US policies and strategies that are dangerous”.

The anti war activist described these policies as “anti human” and affirmed his right to not stand with Trump and “US war policies that are destroying entire countries and creating tensions between superpowers like Russia and China who all have nuclear weapons”.

He finished up his speech by exclaiming that we have an environmental catastrophe on our hands. 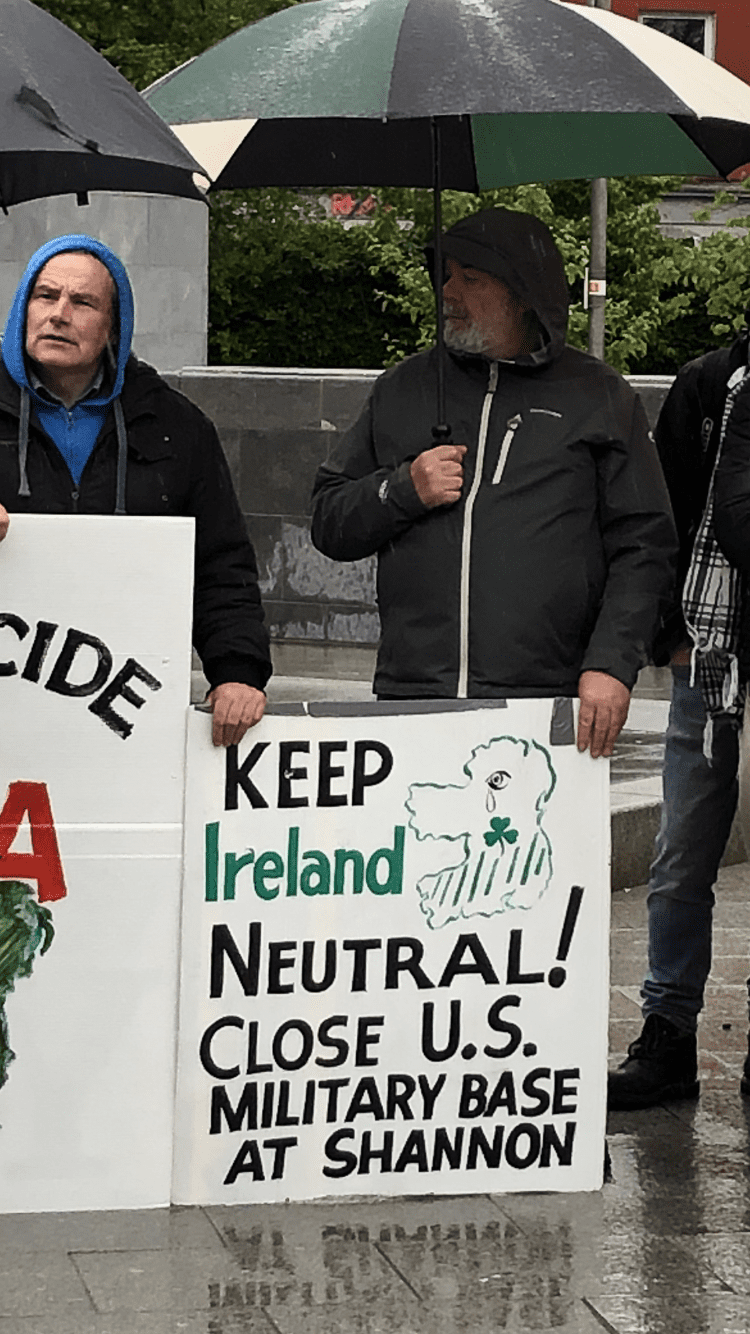 Cameron Keighron was next to speak on behalf of Amach which is an LGBT resource center, describing how he has watched in fear as more LGBT rights and protections are overturned in the United States.

He asserted that “LGBT people have been victims of hate and discrimination across the globe for Centuries for being who they are”.

Mr Keighron slammed Donald Trump for “systematically cutting and repealing legislation” in an effort “to hurt the most vulnerable members of our community”.

He claimed the US President’s actions directly have directly targeted “some of the most marginalized members of our community”.

The activist condemned Trumps actions as creating a “culture of bigotry, oppression and hate” which leads to an embrace of practices such as “conversion therapy” while simultaneously “removing most rights for the trans community in the states”.

The Amach representative ended his speech with a rallying call to show solidarity with our “LBGT brothers in the states and reassure them that we are supporting them”.

He finished off with a quote he had read earlier on in the day by stating that “the beauty of standing up for your rights is other people see you standing and stand up as well this is what we can do and what we must do”. 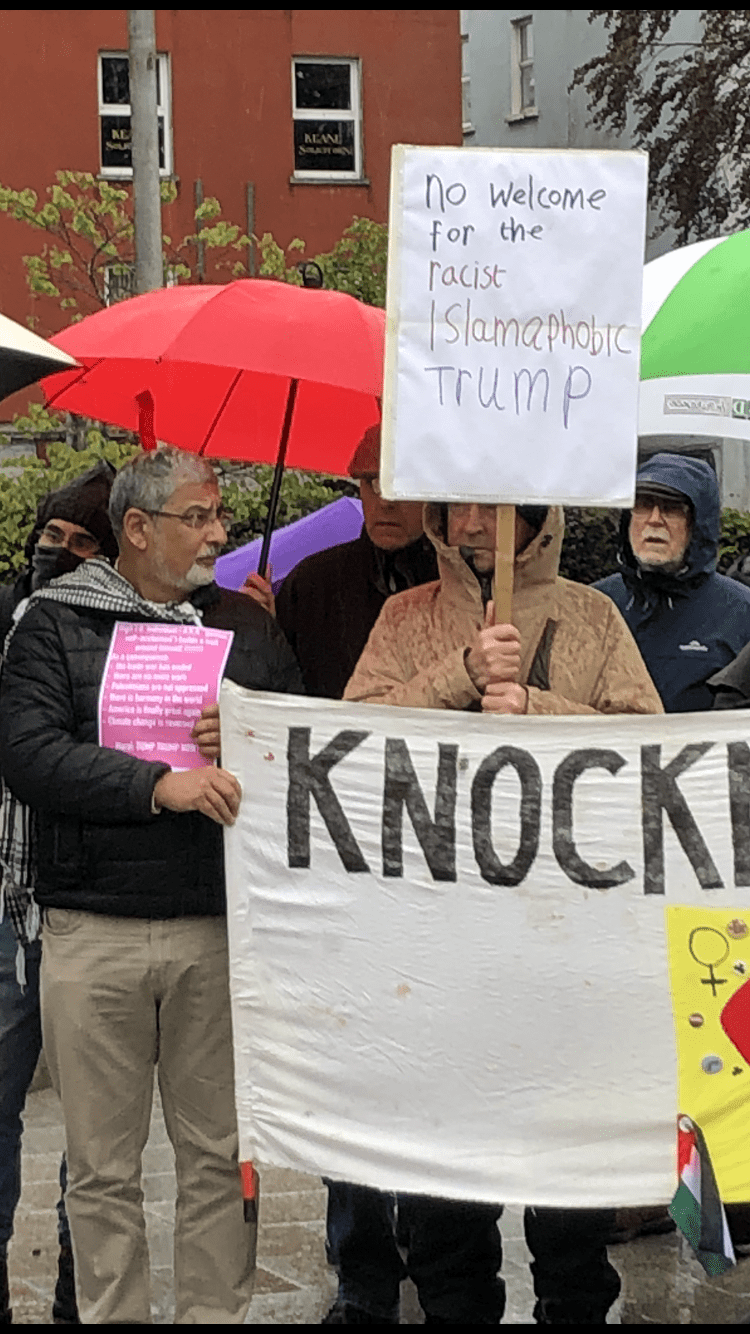 Mark Lohan was speaking in his capacity as a “Trade Union leader” wanting to add to his voice to the protest to declare “loudly and proudly” that Trump doesn’t have the support of organised workers in Ireland or even his own Country”.

He criticized Trump as always being quick to speak about “fake news” when it was the US President who generated fake news by “promising to bring back AFLCIO jobs in the rustbelt and bring back iron-worker jobs”.

The Sinn Féin activist castigated Trump as fanning the flames of populism and praised the Trade Union Movement for always standing firm with progressive causes.

He concluded his speech by declaring that this protest was not an Anti American protest and was instead an Anti Neocon and Neoliberalism protest which undermines workers rights across the world.

NUI Galway Students’ Union has launched the Marchathon Step Challenge for staff and students at the University, with 30 teams having registered so far...
Read more
Facebook
Twitter
Pinterest
WhatsApp