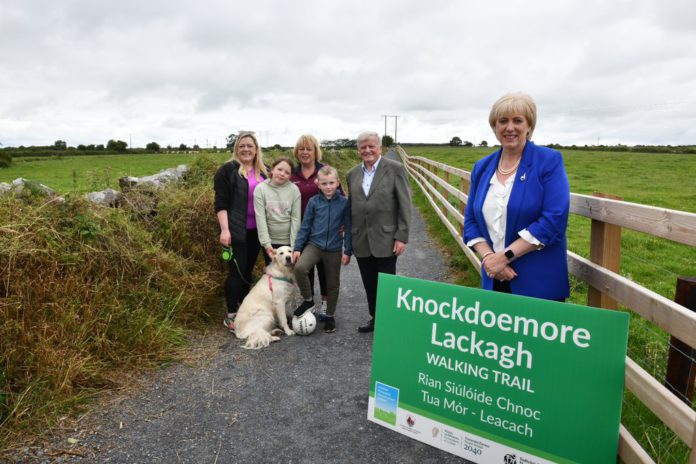 The Minister was in the county opening series of new rural development projects as part of a trip across Ireland promoting Our Rural Future – which aims to revitalise towns and villages, promote remote working, and ensure balanced regional development.

On her final day of the tour, the Minister visited the Bia Innovator Project in Athenry which received over €2.93 million through the Rural Regeneration and Development Fund.

The Bia Innovator Campus is a large scale project and will provide food production units and co-working kitchens when complete.

The campus will create 360 jobs in over 40+ businesses, delivering training, development and support to in excess of 2,400 entrepreneurs.

Speaking in Athenry Minister Humphreys said: “The Bia Innovator Campus is a transformative project for Athenry and the West of Ireland.

“Indeed, I believe this project will gain national significance, when it assumes its position as a key part of the Teagasc network.

“As the people here today know all too well, the food sector is one of the most important industries in Ireland.”

The Minister said that Our Rural Future is the most ambitious and transformative policy for rural development in decades.

“The new policy seeks to build on the strengths already present in rural Ireland – like our agri-food sector – and transform the quality of life and opportunities for people living in rural towns and villages,” she said.

“Taking advantage of this opportunity requires joined-up thinking across Government, State agencies and the wider agri-food sector. And so, I view this project as a shining example of the type of approach that is needed.  ”

Her final stop in Galway was a visit to the Lackagh to Knockdoemore walking trail.

Speaking about her visit to Galway and the Islands, the Minister added: “I have really enjoyed my time in Galway and meeting the communities on Inis Oírr and Inis Meáin was a particular highlight.

“I have met many rural communities across the country and I have listened to what they are saying.

“While there are challenges, there is huge optimism and hope for the future in rural Ireland.”