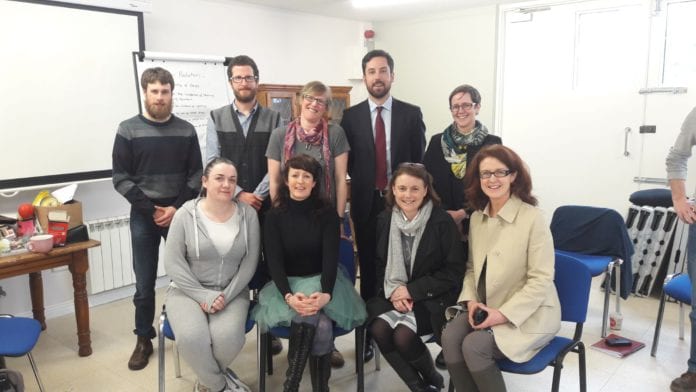 The Minister for Housing, Planning and Local Government Eoghan Murphy sat down with teams from Galway Simon Community and COPE Galway last week, as part of the visit by the Taoiseach and four Ministers in Galway City.

Among the topics discussed were the controversial Project Ireland 2040 plan, affordable housing and HAP.

Karen Golden, CEO of Galway Simon Community said the visit was a welcome one.

“We were really delighted to welcome the Minister to our new emergency accommodation service for an impromptu meeting.

“The teams from both Galway Simon and COPE sat down with the Minister and we had a very open conversation about the homelessness crisis in Galway.

“We were able to discuss some of the proposed projects for Galway in the Project Ireland 2040 Plan and we put key questions to the Minister around the provision of social and affordable housing, as well as the extension of the Homeless HAP Scheme to Galway.

“We would like to extend our thanks to the Minister for accepting our invitation on the day to visit our service and for taking on board the feedback and questions from both teams in an open way,” she said.

Karen went on to say the visit allowed the Minister to get first-hand accounts of the issues that are faced locally and said that the meeting was a huge opportunity for both Galway Simon Community and COPE Galway to come together to advocate for those experiencing homelessness in Galway.

Minister Murphy has undertaken to respond to the charities on some of the key queries raised during the meeting and advised that he will be following up on key areas discussed.