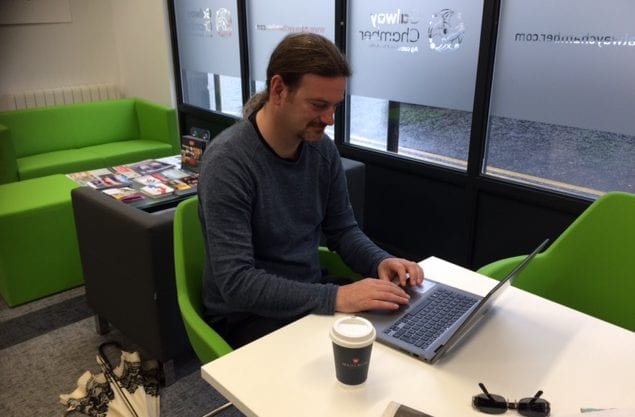 A Galway businessman has gotten the green light on a million euro in funding for an idea that will pay off for his investors and for society in general.

It’s called Pip iT which stands for Pay in Person Information Technology and it is the first module of it’s kind to allow cross border bill payment, something needed for migrant workers

Ollie Walsh is the CEO for PiP iT. After seeing the need, he saw a way to fix it.

“It is hard for migrants to get bank accounts in their new countries and expensive to send money to support families back home. We have found a way to solve both of those problems,” he says.

And funders are on board. Enterprise Ireland has just announced it is investing $250,000.

The rest of the money is from venture capital funds, angel investors and supporters of social impact companies from Ireland, the UK and the U.S. Those are funders who help develop companies with ideas that not only serve investors but society overall.

They all see this payment transaction system, PiP iT as a social game-changer in finance.

Sending money home to a family member to pay a bill is expensive, risky and can end up going to something other than that bill. PiP iT teams up with collectors and remitters to make it possible and affordable.

Walsh sees it as digitizing cash.

“The money is remitted to the biller. It goes directly to the power company or the phone company. And 100% of what you pay goes to the bill, not to fees.”

How do they do that? Partly by putting the good they can do above the money they could make. They are a social impact company. It’s in their mission.

By dealing business to business they eliminate the security problems and the leakage. And where other payment systems charge as much as 10% of the transaction in fees, PiP iT charges only 1.5% and that is covered by the companies collecting the money.

“When you pay with a credit card the companies have a built in amount that pays that credit card charge say to Visa,” Walsh says.

“We have them paying that for these payments. So our money will be made in the quantity of payments. And we are confident the system will attract a lot of payments.”

PiP iT is already collecting payments in the UK, Canada, and South Africa and remitting payments in Nigeria, Ghana, Zimbabwe, Cameroon, and Tanzania. He says the Philippines and India are about to come on line.

“A solid 70% of the Middle East is migrant,” Walsh says. “And there if you work in construction, domestic work or hospitality services you are paid in cash.

“You have to have a certain kind of visa to even open a bank account there and anyone in any of those trades can’t get that visa no matter how long they live there. They are in a true cash economy.

“They can’t get an account or a credit card. And they are usually there sending money home to support their families. But to get money there is expensive and risky.”

PipiT gets them out of that loop and allows them to avoid the high-fee payment systems they’ve had to use until now.

For now, they are researching migration patterns to see where their system is needed most. They are tracking where people are moving to and finding partners for collections…and where they are moving from to know where they need remittance partners. Once the network is there they plan to expand services to be able to lodge cash to a bank account back home and to e-wallets.

You can read more about PiP iT here.