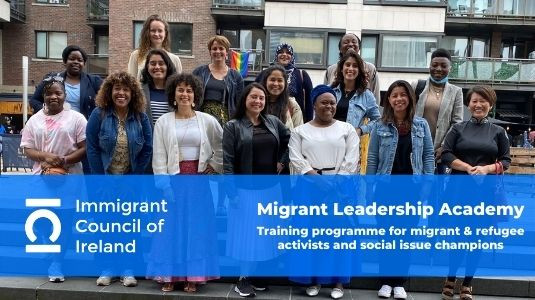 The Immigrant Council of Ireland is inviting migrant and refugee activists from Galway to take part in its Migrant Leadership Academy programme.

The programme, which is being launched this week, brings together social justice and equality champions to enhance their leadership skills and design initiatives to benefit their local communities.

It will be the Immigrant Council’s third Leadership Academy, which aims to address the lack of migrant representation in the social justice sector and build the capacities of future community leaders.

Running for nine weeks from September to November, the academy will be a blended learning experience consisting of weekly online classes, pre-recorded video sessions and home exercises.

The programme will upskill participants in subjects including community organising, political mobilisation, campaigning and more.

It is open to migrants and refugees, including those currently applying for international protection, who are 18 years of age or older and who come from a non-EU/EEA background.

The programme is particularly suited to existing activists committed to social justice and equality who are active in their communities and already have established local networks.

Speaking about the launch of the academy, Immigrant Council of Ireland Integration Manager Teresa Buczkowska said that Ireland is an increasingly diverse society, with one in eight of us coming from a migrant background.

“The reality, however, is that many migrants don’t see themselves represented in many key sectors of Irish society, including the social justice sector,” said Teresa Buczkowska.

“Many migrants and refugees are doing great work in their local communities championing issues and effecting positive change, but their hard work is often overlooked.

“Many are isolated and lack support from their peers and opportunities to fine-tune their skills to become better leaders and organisers.”

Teresa Buczkowska said that the Migrant Leadership Academy strives to identify talented migrant and refugee leaders and provide them with the space to connect with one another.

“The academy will also help migrant leaders design and implement their own social justice campaigns and migrant integration initiatives,” she said.

Along with two other migrant women who also participated in the Leadership Academy, she founded the Le Chéile gym in Galway – a social enterprise which provides free health and wellness support to international protection applicants in the local area.

“I have always been interested in helping communities to help themselves, and bringing my business management skills to the not for profit sector,” said Megan Flynn Dixon.

“The Leadership Academy gave me practical tools for improving the impact of my work and expanded my network both socially and professionally.

“Along with my co-founders Jennifer Fri and Megan Maria Brown, I am so proud of what we’ve accomplished with Le Chéile.

“So many migrants and refugees in the international protection process are living in limbo awaiting a decision, with little to occupy their time. The impact on mental and emotional health in these situations can’t be overstated.”

She said that she has seen a huge change in so many clients at the gym.

“You can see in their faces they’ve been able to reclaim some of their livelihood. They feel like people again, not just a number in a long queue,” she said.

“The Leadership Academy empowers activists like me to take an idea and make it a reality. The skills I learned were invaluable in taking my initial concept and turning it into a working model.

“I would encourage other migrant activists to get involved. Those who feel passion to make a change in their local communities but don’t know where to start. Not only will you learn what you need to know, but you’ll be joining a family of migrant activists who are always there to lean on for support and for ideas. It’s been an absolutely fantastic experience.”

The Migrant Leadership Academy runs from 23rd September to 18th November 2021. Anyone interested can learn more or apply through the Immigrant Council’s website at www.immigrantcouncil.ie. The deadline for applications is Monday, 23rd August.