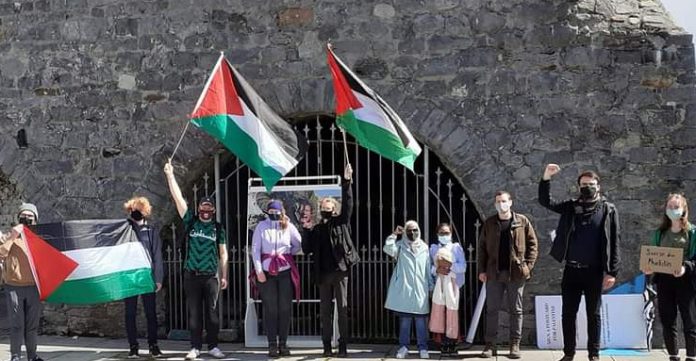 Hundreds of people attended a rally yesterday afternoon at the Spanish Arch in Galway City in a display of solidarity with Palestine following the latest bombardment of Gaza by Israeli forces.

Those in attendance at the rally carried posters and banners displaying messages of support and solidarity with those in the besieged Gaza Strip, while many carried the Palestinian national flag.

Protests were held in cities and towns across Ireland on Saturday as Israel continues its bombing campaign, killing over 100 people including civilian families and dozens of children in Gaza over the past week.

The #Galway vigil for #Palestine was so big yesterday that they decided to leave the city centre and cross the Corrib in order to spread out safely and observe social distancing at South Park. #Ireland#GazaUnderAttack pic.twitter.com/fMJiHL94Qb

The offices of the Press Association and Al Jazeera were hit by an Israeli missile yesterday, collapsing the building and sparking widespread condemnation across the world.

People Before Profit Galway representative Adrian Curran, who attended yesterday’s demo, said that Israel has bombarded Palestinians indiscriminately over the past week, killing and maiming men, women and children and making the gruelling existence it already imposes on Palestinians even harder.

“Actions such as the occupying forces’ assault on Gaza, ethnic cleansing of Palestinian families in the Sheikh Jarrah neighbourhood in Jerusalem and attacks on Palestinians at the Al Aqsa compound in the city have fully exposed Israel’s racism to the world,” said Mr Curran.

“Israel cannot be allowed to continue to inflict repeated outrageous breaches of international law through its murderous occupation and illegal settlements.”