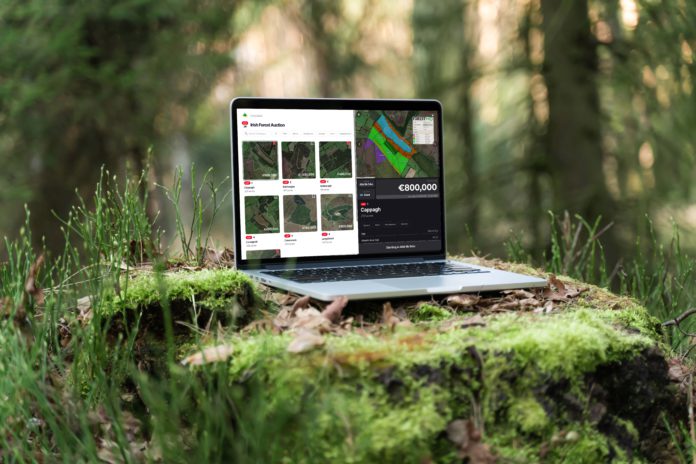 A Galway company is helping to revolutionise the forestry industry in Ireland with the launch of a new online auction platform for buying and selling forests.

MartEye, the Galway based entrepreneurs who kept marts running in the virtual realm last year with their digital auction platform, and Cork based Treemetrics forest valuation company have teamed up to create Forest Bidder.

This online platform has been created to add transparency to the sale of forests in Ireland via an open bidding process. Forest Bidder will be going live at the end of this month, with its auction of seven forests for sale in Ireland taking place on May 28.

Ciaran Feeney, co-founder of MartEye said that currently a lot of forestry sales are handled through sealed bids, creating an “opaque marketplace” where a farmer or other seller wouldn’t really know the value of the forest they are selling.

“There are a huge amount of farmers who would have planted forests years ago because there were grants available, and that crop is starting to come of age and they can think about selling it.”

“But a lot of them wouldn’t know where to go, and this is where Forest Bidder would come in. Where the valuation is at market price, and then it is opened up in a transparent market to whoever wants to purchase it.”

MartEye were approached by Treemetrics to create a platform for publicly auctioning woodlands due to their experience in building online auction platforms.

Last year, MartEye was launched as online bidding platform due to the fact that Marts were closed because of COVID-19, but farmers still needed a way to way to sell their animals.

Despite being little more than a year old, MartEye is already used in more than 60 marts around Ireland and the UK, and has launched a similar service for the sale of machinery.

Treemetrics came to the idea of an open bidding platform for forestry after one instance where they were approached by a forest owner in Munster.

He had been offered €170,000 for some forested land he owned, but decided to get it valued. Treemetrics subsequently valued the forest at just over €800,000.

Enda Keane of Treemetrics said that they realised that forestry was currently a “buyers market” and the people selling the crop had little knowledge of what it was worth.

“Apart from knowing the value of their crop, the owners need to place the forests for sale in a marketplace that ensures a wider audience of local and international buyers.”

While the idea is relatively new, Ciaran Feeney said that Forest Bidder has already gotten quite a lot of traction, especially as forestry has become something of a “hot topic” with businesses thinking about sustainability and climate change.

“There’s been a lot more of an environmental aspect [in forestry] in the last year. People are taking note of Microsoft purchasing forestry in the south and south west of Ireland.”

“There’s companies where it’s almost like a badge of honour for them. They are able to point to – this is the forest that we own, this is how much carbon it offsets from our other carbon producing practices.

Interest has come from many levels of organisations, Ciaran said, from large scale investment funds to individual investors thinking “this might be my retirement fund, I might want to put some money into this”.

All of the sales for the first auction are from within Ireland as it is their “home turf”. But, he added, they have already been from parties in Europe and Australia interested in selling forests.

The second auction has already been lined up, with Forest Bidder planning to oversee the sales of €7 million worth of forests within Europe.

There are an estimated 16 million private owners in the EU. Many owners have moved to towns and cities and have lost connection to the forest, and Enda Keane says they hope to become the ebay for forest sales by helping owners get the best selling price.

“This is a global opportunity, and we are not limiting this just to Ireland and the EU. We are actively talking to forest owners internationally to open up the offering.”