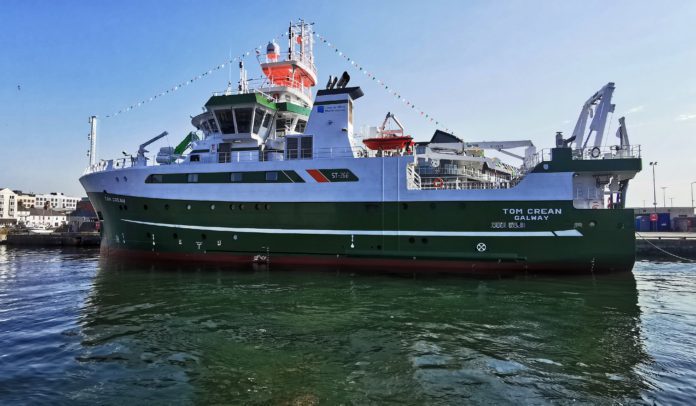 Ireland’s newest marine research vessel, the RV Tom Crean, has been commissioned today by Minister for Agriculture, Food and the Marine Charlie McConalogue.

The ship, named for the famed Irish explorer, will be based in Galway for the use of the Marine Institute in Oranmore.

Kerry man Tom Crean is known for his part in three ground-breaking expeditions to the Antarctic in the early years of the 20th Century.

Minister McConalogue speaking at the commissioning said, “I don’t need to remind anyone here today that Irelands oceans are vital to our economy, our environment, and many aspects of our daily lives.”

He added that the vessel will be used for “essential scientific work” such as assessing fisheries, and supporting offshore renewable energy, climate change research, and protected marine areas.

The new research vessel is a silent vessel, capable of operating throughout the Irish Exclusive Economic Zone (EEZ) and will replace the RV Celtic Voyager, which was Ireland’s first purpose-built research vessel which arrived in 1997.

The ship makes much less underwater noise than traditional vessels, reducing the effect of noise on fish populations while surveying and sampling, so that a more accurate stock assessment can be made.

The RV Tom Crean will be at sea for 300 operational days each year – heading to sea for at least 21 days at a time.

It aims to accommodate up to 3,000 scientist days annually, and is designed to operate in the harsh sea conditions of the Atlantic.

Dr Paul Connolly, CEO of the Marine Institute said, “We are delighted to name our new research vessel after Tom Crean as it gives recognition to an Irish explorer of international renown whose life was packed with amazing feats of Antarctic bravery, determination and courage.”

He added that they were pleased that the descendants of Tom Crean supported the Marine Institute in this decision.

The vessel design incorporates the latest proven technologies to ensure that it operates as efficiently as possible, with reduced fuel consumption and minimising its environmental impact and carbon footprint.

Families vote for the ugliest deep sea fish in the ocean