The Seadevil angler fish was voted as “one of the ugliest deep-sea fish species” in the world at Galway Science and Technology Festival.

Families and kids picked out the Black Seadevil and the nastiest looking from a wide range of weird fish that fill the deepest parts of the ocean.

This was at the Marine Institute Exhibit at the festival, where families saw a display of supersized photos of the deep sea species. The Blobfish known as Mr Blobby, the viperfish with giant fangs, the hagfish that produces slime in seconds, and the goblin shark with a protruding jaw.

Cushla Dromgool-Regan, Explorers strategic education and communications manager at Camden Education Trust, said she was delighted to produce a new book and resources that showcased the amazing animals that are found in the deepest parts of the ocean in Ireland and around the world.

“I love deep-sea animals and their amazing ability to adapt under extreme conditions,” said Cushla Dromgool-Regan.

“The animals selected for the book were based on some of our favourite deep-sea species that we have affectionately called the good, the bad and the ugly – because of their incredible features that help them survive.”

Some look cute but are deadly and others look angry but are basically looking for their next meal,” she added.

The vote took place at the launch of the new Explorers educational book and resources Explorers: The Good, The Bad + The Ugly Deep Sea Species. 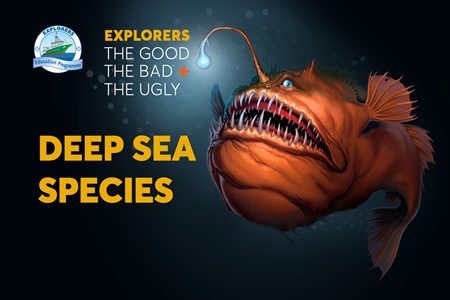 “As our mascot, we were delighted to see the Black seadevil anglerfish come in with top votes by children who loved learning about its bioluminescent lure, expandable stomach and huge mouth that can pretty much eat anything it can get its mouth around,” said Ms Dromgool-Regan.

“There are over 200 species of anglerfish. Among them the species known as the Monkfish, can open its mouth wide enough to engulf other animals larger than its self.”

“It is reported that Monkfish have been found with birds in their stomachs including gulls, puffins, and cormorants.”

The workbook and lessons and activities are also really well illustrated and we are sure will help develop children’s STEM skills, while also increasing their engagement in the ocean.”

The Explorers team will also be delivering Deep-sea Species class projects with primary schools, where teachers will receive printed copies of the introductory book and workbooks, with a range of cross-curricular activities for the children.