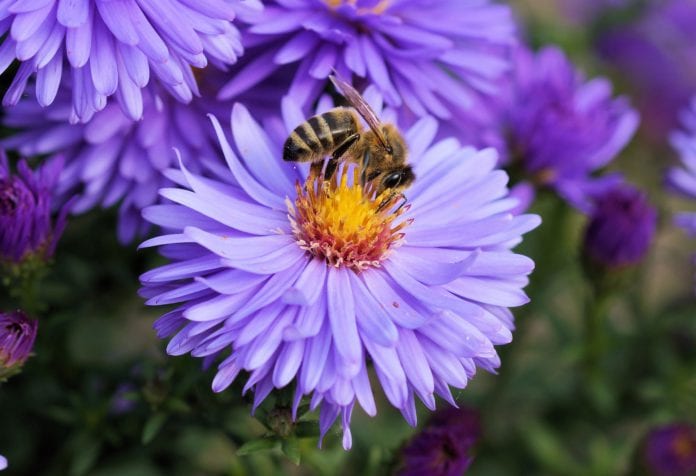 The Marine Institute is joining the movement to protect endangered bees and wildflowers by converting a third of its green areas to wildflower meadows.

The All Ireland Pollinator’s Plan aims to provide safe habitats for Ireland’s wildflowers and 98 species of bees, a third of which are endangered.

The Plan invites local businesses, schools, councils, farmers, or anyone in the community really, to take what steps they can to give pollinators a fighting chance in the area.

The Marine Institute’s headquarters in Oranmore are an 11,000 sq ft complex with significant grounds on the coast of Galway Bay.

“We are delighted to be taking part in Biodiversity Ireland’s plan and have signed up to a number of the Pollinators 17 actions which includes creating a long flowering meadow and walkway, introducing pollinator-friendly planting and native species, as well as providing nesting habitats for bees.”

That’s from Toni Hollowell, facilities manager and chair of the Get Greener Committee at the Marine Institute.

The All-Ireland Pollinator Plan 2015-2020 was crafted by 68 government agencies and other groups involved in protecting the environment to address a rapid drop in the number of pollinators.

Losing them would have a larger impact on Ireland than might be expected, as pollinators contribute at least €53 million to the economy every year through their role in helping crops grow.

And they’re essential in keeping the wild beauty that Ireland is known for intact, as 78% of our wildflowers require insect pollination.

Of Ireland’s 97 bee species, 20 are bumblebees and the other 77 are solitary bees, which live alone rather than in hives.

They need a constant supply of nectar from flowering plants while they are active from March through to September.

It’s also important that their habitats; long grass, bare earth, and crevices in stone, should be free of pesticides.

Chairperson of the Marine Institute’s Sustainability Committee Dr Debbi Pedreschi said everyone is enthusiastic about the new project.

“The enthusiasm and new initiatives led by staff are an excellent examples of bringing staff together to be community based, sustainable and energy efficient.”

“We even hope to get the Institute’s crèche involved, helping out with the Muddy Hands initiative and building bug hotels for the wildflower meadow.”

The plan suggests that businesses with outdoor spaces could reduce the level of mowing they do, and cut down on the use of pesticides.

It would also benefit them to plant flowers helpful to bees, and to create habitats like earth banks or bee hotels for them.

More information on what you can do to protect the habitats of wildflowers and pollinators can be found on pollinators.ie.