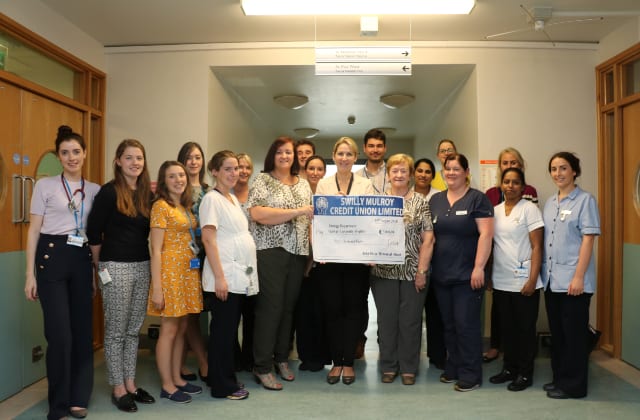 The family of a Donegal man have donated €3,000 to University Hospital Galway in gratitude for the care he received there before passing away.

John Diver, from Milford in Donegal, was a patient at the St. Pius ward at UHG for a time before he passed away last year.

He died peacefully last August at Donegal Hospice surrounded by his family.

His wife, Agnes Diver, and daughter, Carmel Diver presented the cheque to Dr Catherine Dowling, a consultant Urological Surgeon at UHG who cared for him, earlier this week.

Dr Dowling expressed her thanks for the donation, “We are very grateful to the Diver family for their kindness and generosity in acknowledging the care provided to their loved one here on St Pius Ward.”

“The staff will use the funds to make improvements to the nurses staff room on the ward which will be a lasting legacy to the memory of Mr Diver.”

The money was raised through a charity clay pigeon shoot organised by Mulroy Clay Pigeon Club, which Mr Diver founded and ran until he became too ill to do so.

The Mulroy Clay Pigeon Club hosted two international championships in the time he ran it, and he also received a Donegal Sports Star award.

He is survived by his wife of 57 years and three children.