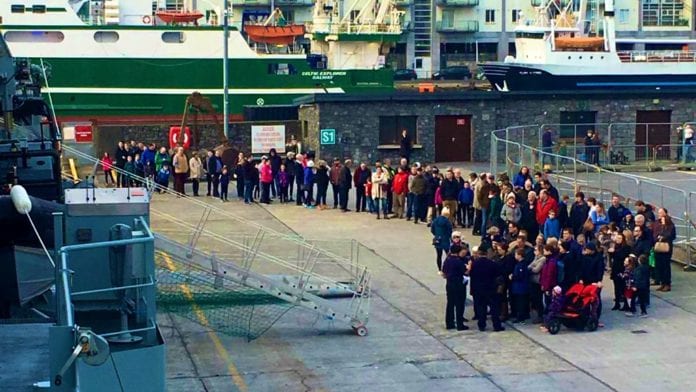 People are queuing up down at the docks today to get a look aboard the navy’s LÉ George Bernard Shaw.

The newest patrol vessel in the fleet of the Irish Naval Service and one of the four ‘playwright’ sister ships, the George Bernard Shaw has been docked at Galway for the public to view over New Year’s.

Her crew have been providing the public with guided tours of this state of the art patrol vessel.

A few pictures from LÉ George Bernard Shaw (#P64) over the last number of days having conducted fishery boarding operations, man-overboard exercises and tours for the public alongside #Galway. The Naval Service is currently recruiting #JoinOurTeam https://t.co/OUh9LvZjPy pic.twitter.com/7MOT1GtoKo

The George Bernard Shaw was delivered to the Irish Naval Service in 2018 and will have its official naming ceremony later this year.

The public tours of the LÉ George Bernard Shaw come as the naval service is undergoing a recruitment drive.

There are currently just under 1,100 personnel in the naval branch of the defence forces.

Duties of the Irish Naval Service include patrolling Irish waters for illegal fishing ships and narcotics smuggling, marine rescue missions, and deployments to the Mediterranean to combat human trafficking.