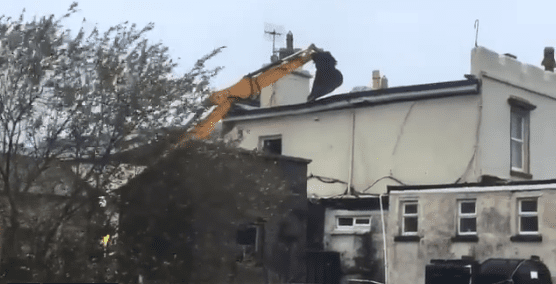 When Storm Ali looked like it was about to rip the entire roof clean off of Renvyle Post Office, some quick thinking neighbours used an unorthodox method to keep it in place.

In a clear case of it-isn’t-stupid-if-it-works, Liam Diamond called local plant hire business Graham Heanue who hurried down with a JCB and held the roof in place with its bucket.

The strange incident was caught in film by Liam’s daughter Priscilla.

Had the entire roof of the building been blown out into the street it could have very easily hurt or killed someone.

Diego Diamond shared the video of the somewhat out of the ordinary renovation works via twitter.

The JCB remained in place the next day until a builder was able to temporarily secure it in place.

Gusts of up to 147km/hr battered Galway at the height of Storm Ali, downing countless tress across the county.

The storm claimed the lives of two people, one of the them a Swiss tourist who was killed in Galway when her caravan was blown over a cliff at a campsite near Claddaghduff.

Now Met Eireann are warning of another possible Atlantic storm front that could hit Ireland on late Saturday, into Sunday.

They are tracking the weather front, which is proving difficult to predict at this point.