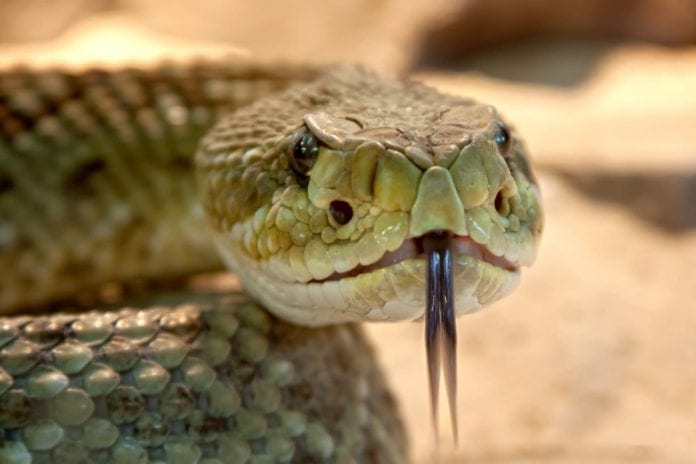 An international effort led by scientists from NUI Galway has figured out why the venom of some snakes is so much deadlier than other.

Snake venom is infamous for often being deadly to humans and prey alike, but some species such as cobras, boomslangs and rattlesnakes have far more venom than they apparently need.

Within a single reserve stored in their body they have the potential to kill thousands of their natural prey and several adult humans.

While some like the marbled sea snake have only a small amount of weak venom that makes them relatively harmless to a full grown human.

This difference has long puzzled scientists with competing hypothesis put forward as to why this is.

Now a fresh study has compared the venom potency of over 100 species of venomous snakes ranging from rattlesnakes, cobras and the tree dwelling boomslangs of Africa to sea snakes and burrowing asps.

What they found is that the strength of a snake’s venom is closely linked to its diet.

The venom of snakes that live mostly on fish, like aquatic coral snake, is most potent against fish, and weaker against creatures like mice, which are very distant on the tree of life.

Lead author of the study Dr Kevin Healy, Lecturer of Zoology at NUI Galway said, “These results make sense from an evolutionary viewpoint as we expect that evolution will have shaped venoms to be more efficient at killing the animals that are most often the target of the venom.”

“You won’t find many mice in the sea so we wouldn’t expect a sea snake to evolve venom that is more effective at killing mice than fish.”

The research also showed that the amount of venom a snake has depends on both its size and the environment it lives in.

It’s hypothesised that the reason larger, terrestrial snakes have more venom stored in their glands is due to them having to take advantage of less frequent encounters with prey in their environment.

The results of the study also have potential to aid in our understanding when it comes to human snakebites.

Understanding how venom evolves may help us better identify the risks to humans from different snake groups, and also potentially from other venomous animals such as spiders, scorpions, centipedes and jellyfish.

It’s hoped that the same approach that was used in this study could be used to predict the potency of venoms in other creatures and help with the healthcare applications.

“The next step is to see how well this model may predict the potency of venoms in groups that have yet to have their venoms tested,” said Dr Healy.

“By using ecological and evolutionary data for available species we may be able to use our approach as a tool to identify other species which may have properties in their venoms that are useful for biomedical purposes, such as drug development.”

Michael Malone - August 8, 2022 0
The government has announced additional funding of €724,000 to improve non-public roads and rural laneways in Co. Galway. Galway's allocation is part of €11 million...