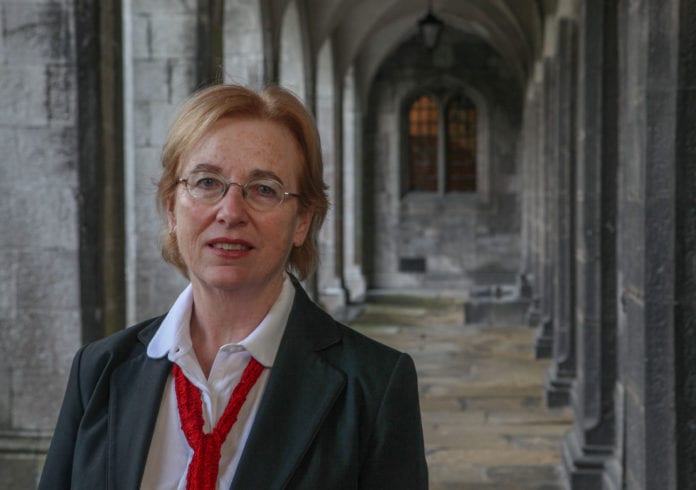 Pictured above:  Dr Carol Coulter, Adjunct Professor in the School of Law at NUI Galway.

The findings of a two-year NUI Galway research study on lengthy and complex sexual abuse cases involving children has been published.

Limited specialist services for victims of child abuse, lack of cooperation between the Garda Siochána and Tusla social workers, and problems in the organisation and practice of the courts all contribute to certain child protection cases lasting up to three years, according to the new report.

The Childcare Law Reporting Project undertook research on exceptionally lengthy and complex cases which were already reported on its website to examine why some cases become highly contested, protracted and complex.

As well as examining the cases in detail, the CCLRP interviewed 40 key participants in these and other complex cases.

Main Findings from the Final Report:

The report, An Examination of Lengthy, Contested and Complex Child Protection Cases in the District Court, and launched this week by Chief Justice Mr Frank Clarke, was carried out by the Childcare Law Reporting Project (CCLRP) directed by Dr Carol Coulter, Adjunct Professor in the School of Law at NUI Galway.

The prolonged and complex cases examined share certain features, including allegations of very serious harm to a child or children, involving the likelihood of a criminal investigation; lack of coordination between State agencies concerning the allegations made; the involvement of a substantial number of expert witnesses; the requirement for professional assessments of the children and sometimes also of the parents; difficulties and delays in obtaining such assessments; disputes between experts as to the findings of the assessments and disputes between the Child and Family Agency (Tusla) and other parties on the admissibility of evidence.

Of the ten cases examined, the longest ran for 52 days in court over a period of nearly three years. Adjournments were common, for example, there were 22 adjournments in one case.

The numbers of lawyers involved was high, with up to 10 lawyers in some cases. Seven of the ten prolonged cases examined, and all except one of those that took over a year, were heard outside Dublin, with six of them heard by ‘moveable’ judges, who are called in by the local judge when he or she does not have time to hear a lengthy case. This can cause a range of logistical problems for hearing the case.

Statistics collected by the Childcare Law Reporting Project, and separate research by the Legal Aid Board, suggests that child protection cases involving sex abuse allegations make up only 5-6 per cent of all child protection cases coming before the courts, which in turn form only a minority of all Tusla interventions on behalf of children at risk, so these cases are not at all typical of the bulk of work undertaken by Tusla.

Nonetheless, they demonstrate systemic problems with the child protection system as overseen by the courts.

The Child Care Law Reporting Project was set up in November 2012 by Dr Carol Coulter, with the support of Atlantic Philanthropies, the One Foundation and the Department of Children and Youth Affairs, and with administrative and technical support from Free Legal Advice Centres with a five-year programme of work, which ended in February 2018.

As well as Dr Coulter, the project has the assistance of five part-time reporters in attending court cases around the country, including Maria Corbett, who was awarded a Hardiman scholarship by NUI Galway to undertake research on child care proceedings.

Along with her duties as supervisor, Dr Coulter delivers occasional lectures to NUI Galway students of law and social science. Dr Coulter said: “I am delighted to have the support of NUI Galway’s School of Law in continuing the work of the Child Care Law Reporting Project.

“It reflects the School’s commitment to excellence in public law, and I look forward to closer collaboration with the School in the future.”

Dr Connie Healy from the School of Law at NUI Galway, said: “We at the School of Law would like to congratulate Dr Coulter on her success with the Child Care Law Reporting Project to-date and look forward to working closely with her in her role as Adjunct Professor during the next phase of the project.

“Her insight into the Child Care System in Ireland has contributed greatly to both our undergraduate and PhD candidates’ knowledge on this important area of law.”

The report by Carol Coulter, Director of the Child Care Law Reporting Project, was commissioned by the Department of Children and Youth Affairs and is available at:www.childlawproject.ie