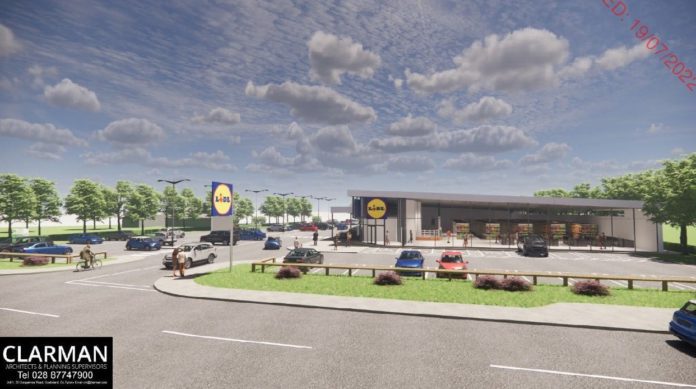 Lidl is appealing to An Bord Pleanála against the county council’s rejection of plans for a new supermarket in Portumna.

Planning permission was refused for the construction of a single storey supermarket on a site between Clonfert Avenue and Dominic Street in Portumna, in late November.

In refusing planning permission the county council said that one of the two proposed vehicular entrances, onto Dominic Street, would create a road traffic hazard.

The council said that it had insufficient sightlines, and that the additional turning onto and off the road would interfere with the free flow of traffic.

The second reason given for refusing planning permission was that the proposed layout failed to mesh with the urban form of the nearby town centre, and Architectural Conservation Area streets of Portumna.

The prosed supermarket would have a total floor space of 2,275m², and 1,409m² of retail space, with pedestrian and vehicle access onto both roads it faces.

A planning report submitted with the application states that it is expected to create 25 permanent jobs when open, and in excess of €1.5 million worth of wages during the construction phase.

The report also states that developing a new physical retail store in Portumna would help stop money going to other catchment areas, or online food shopping.

It also states that additional retail offerings are needed to accommodate future population growth in the town and surrounds.

In their appeal against the council’s decision, Lidl states that there is no substantiated basis to the council’s position on the access point onto Dominic Street.

As regards the second reason, the appeal states that there is no uniform pattern in the urban form of the area, with varied land uses, as well as building line, height, materials, and scale.

The appeal was lodged with the higher planning authority on December 21, and a decision is due on the case by May 4 of this year.