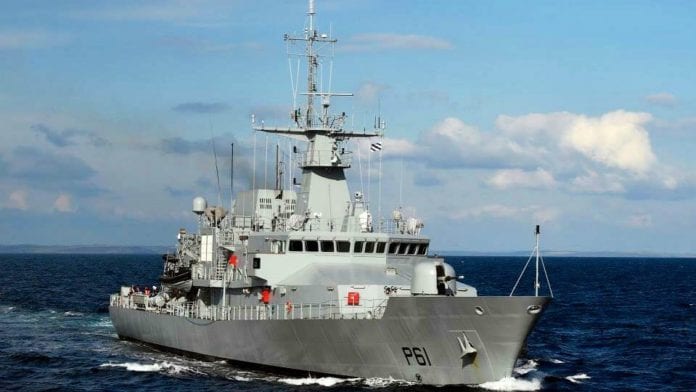 The Irish Navy’s patrol vessel, the LÉ Samuel Beckett, will be offering guided tours to the public in Galway this weekend.

The Samuel Beckett is currently in Galway after it detained a fishing boat for breach of regulations off the west coast yesterday.

The first fishing vessel detained by the naval service this year, it was handed over to Galway gardaí this morning.

While it’s around, the LÉ Samuel Beckett will be open to tours by the public alongside Galway on Saturday from 10:00-12:00 in the morning and again from 14:00-16:00 that afternoon.

LÉ SAMUEL BECKETT(#P61) will be open to the public for guided tours by the ships crew alongside #Galway tomorrow Saturday the 12th of January 10:00-12:00 & 14:00-16:00. The Naval Service is currently #recruiting #JoinOurTeam #ÓglaighnahÉireann pic.twitter.com/0djt2lJmHi

The LÉ Samuel Beckett is one of four new patrol vessels build for the naval service since 2014.

They are often called the four “playwright” sisters because of their names.

The Irish navy is undertaking a recruitment drive to bolster its numbers, which stand at just under 1,100.

Duties of the Irish Naval Service include patrolling Irish waters for illegal fishing ships and narcotics smuggling, marine rescue missions, and deployments to the Mediterranean to combat human trafficking.