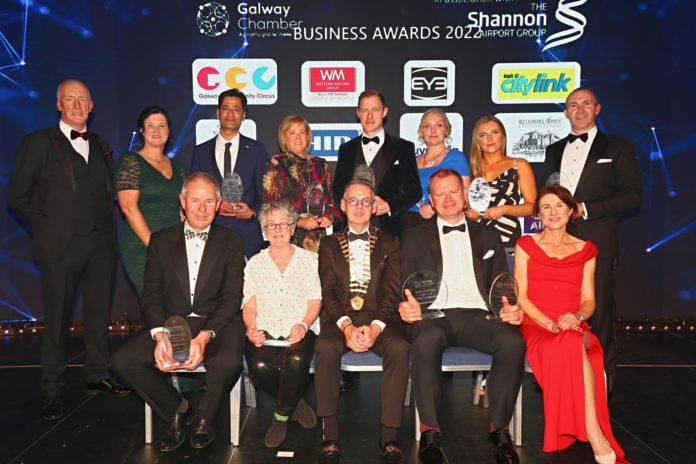 Kylemore Abbey has been named Business of the Year at the Galway Chamber Business Awards 2022, in association with the Shannon Airport Group.

The abbey was recognised for its “immense contribution to employment in Connemara” and for being a dynamic, sustainable business.

Almost 400 people were present for the event which saw ten awards handed out.

As well as the Business of the Year award, Kylemore Abbey was also recognised as the Best Small to Medium Enterprise.

Speaking about the Awards, Dermot Nolan, President of Galway Chamber, said it was ‘truly a delight’ to see so much of the Galway business community come together for this event.

“Our awards have always strived to bring the Galway corporate community together – from startups to multinationals,” he said.

“The size doesn’t matter, what matters is how you conduct your business. That has always been the ethos of these awards and it was once again reflected in those who were nominated and honoured on the night.”

·       Excellence in Innovation, sponsored by EY was awarded to MedScan3D.

·       The Marketing Excellence Award, sponsored by Galway City Council, was picked up by Citylink.

·       The Award for Accessibility, Diversity and Inclusion, sponsored by Galway City Council, went to Eye Cinema.

·       The Culture and Creativity Award, sponsored by Galway Culture Company, was presented to Galway Community Circus.

·       The Award for Sustainability Initiative, sponsored by Shannon Airport, went to HID.

·       The President’s Award, sponsored by PwC, was presented to Garry Hynes, Artistic Director of Druid.

·       The Business of the Year, sponsored by The Shannon Airport Group, went to Kylemore Abbey.