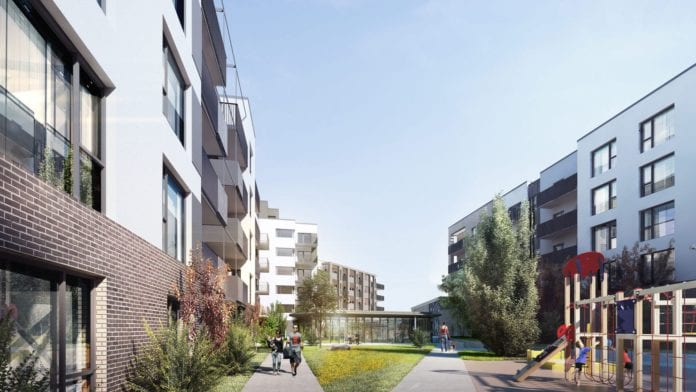 Plans have been submitted to An Bord Pleanála for a massive Strategic Housing Development in Knocknacarra consisting of 332 apartments.

Glenveagh Living is seeking planning permission for a housing development on a six acre site at Gort na Bró in Knocknacarra next to the Gateway Retail Park.

A meeting was held with Galway City Council in September where it was agreed that 40 units in the development would be set aside for affordable or social housing to meet Part V planning requirements.

The proposal also has a commercial element with 2,667sqm of floor space in the plans to be divided among 11 commercial units.

“The purpose of these units is to provide food and beverage outlets, local services (i.e. butcher, baker, hair salon) and convenience retail offering which serves local needs,” the application states.

This housing development makes up Phase 3 of the Knocknacarra District Centre project. Phases 1 & 2 of that project were related to Gateway Retail Park.

“Our vision is to transform this infill site in the heart of Knocknacarra,” an urban design report submitted with the application states.

“A vibrant new public square will be the centrepiece of this six acre urban project and it will be accessible to both new residents and the wider Knocknacarra community.”

The landscape plan for the site has multiple retail, beverage, and restaurant units at the site fronting onto the new civic square and green space to make it a central feature of the district.

The design of the square is meant to make it easily usable for markets or marque events.

Parking at the new housing project would be by way of 85 spaces above ground and a further 181 spaces in a new underground car park.

A road which currently runs through the centre of the site would be reconfigured as part of the construction work.

Due to the size of the development, a Strategic Housing Development Application was made directly to An Bord Pleanála rather than the city council.

A pre-planning consultation meeting was held with An Bord Pleanála in July, and in response to that meeting the higher planning authority said that the documentation submitted “requires further consideration and amendment to constitute a reasonable basis for an application”.

One particular issue raised at that meeting was the relationship between Block B and the Western Distributor Road.

In response the building was redesigned with a longer facade facing onto the road to create a more unified appearance.

An Environmental Impact Assessment Report was also submitted with this planning application.

An Bord Pleanála is due to make a ruling on this housing development by March 20 of next year.