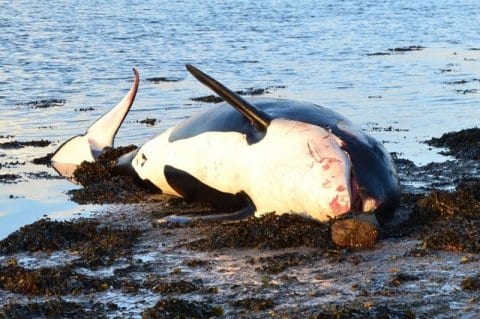 Killer whales stranded in Ireland have had extremely high levels of pollutants in their bodies a Galway based study has found.

GMIT and the Marine Institute  analysed blubber samples from three killer whales stranded in Galway, Mayo and Waterford between 2010 and 2017.

They found that these apex predators all had a dangerous cocktails of pollutants concentrated in their bodies, which may have had significant health effects.

Senior author of the study Moira Schlingermann said that while they found very high results, other parts of the world have shown even worse results in their own studies of killer whales.

“These contaminants are known as legacy pollutants as they were produced decades ago but still persist in our marine waters,” she said of the substances they tested for.

The cocktail of legacy and emerging pollutants, together with other pressures these marine mammals face from noise pollution to the availability of prey, can provide multiple stressors on these top predators.

“The cocktail of legacy and emerging pollutants, together with other pressures these marine mammals face from noise pollution to the availability of prey, can provide multiple stressors on these top predators,” Moira said.

Killer whales are frequently seen in Irish waters, but are rarely stranded here. The few that have been in recent years afforded a rare opportunity for scientists to study how marine pollution has affected these animals.

Dr Simon Berrow, co-supervisor at GMIT and CEO of the Irish Whale and Dolphin Group, part funders of this study, said the build of up pollutants is the biggest long term threat facing whale, dolphin, and porpoise species in Irish waters.

“We have to do everything we can to prevent these substances entering the marine environment and the food chain, because once in it, they will be almost impossible to remove.”