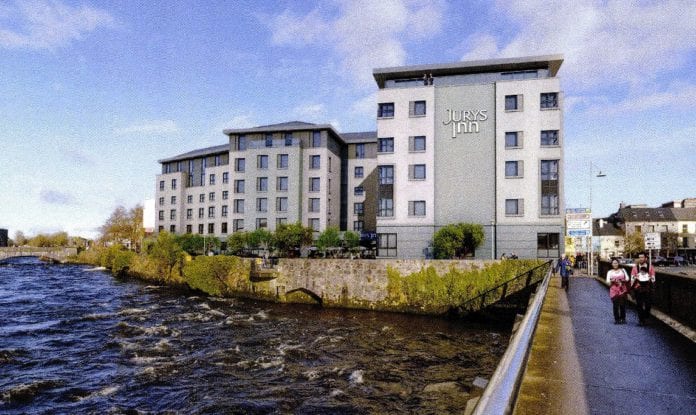 Jurys Inn hotel in Galway city has been granted planning approval for a major expansion which will add an entirely new wing to the building.

The hotel on Quay Street intends to add two new storeys to the entire building, and to construct a new four storey wing facing onto the Corrib.

This will add 89 new bedrooms to the hotel, as well as a new restaurant and bar on the ground floor. This is a significant increase in the size of Jurys Inn, which current has 130 bedrooms.

It’s estimated that this development will result in the creation of 55 new permanent jobs at the hotel, almost doubling its workforce.

The hotel extension was redesigned in response to concerns about the scale of the project from the city council, with the new wing facing the Corrib reduced in size and set back further from the river.

Four submissions were made to the city council concerning this development, three of which were objections and one of which was in support of the project.

The objections centred on concerns about noise, traffic, overshadowing, and access to the Corrib River Walkway.

Concerns were also expressed by An Taisce about the impact this development could have on the adjacent Blake’s Tower/Castle, which is a Protected Structure.

In response the developer reduced the planned roof height of the hotel next to Blake’s Tower in order to minimise the impact on it.

A letter of support for the hotel expansion was received from Galway Chamber of Commerce, and Failte Ireland also expressed its support.

Failte Ireland said that the lack of hotel rooms in Galway “is becoming an increasingly serious issue for tour operators who are finding it more difficult year on year to source rooms in Galway city, particularly at peak periods.”

Planning permission was granted by the city council with a total of 25 conditions attached.

An archaeologist must be hired to carry out pre-development investigations on the site, and to monitor it during construction for any archaeological material.