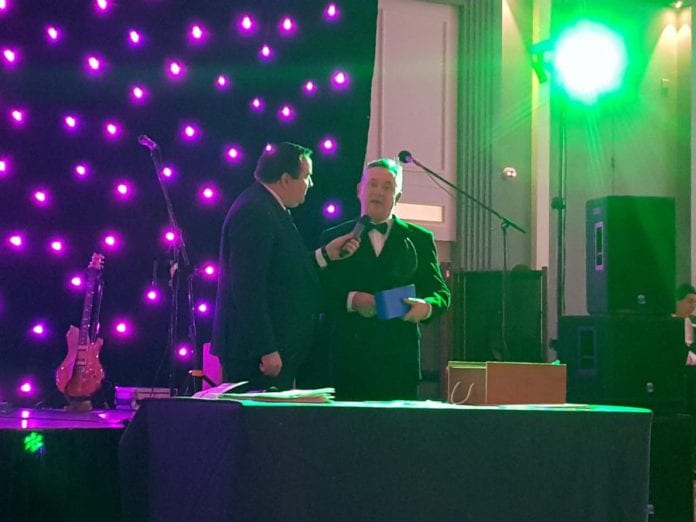 John Crumlish, CEO of Galway International Arts Festival, received a Special Recognition Award at the Galway Hospitality Ball this week for his work making Galway known the world over for the arts.

The annual Galway Hospitality Ball took place at the Galmont Hotel on Monday to celebrate the work of everyone involved in the hospitality industry here in Galway for what they do to make Galway such an incredible place to visit.

The guest of honour at this year’s Ball organised by the Irish Hotel Federation was Mr John Crumlish who was recognised for the years of work he has put into the Galway International Arts Festival.

John Crumlish has been the CEO of the GIAF since 2002 and has seen the festival go from strength to strength, drawing artists, musicians, and of course visitors from every corner of the world.

Each year the arts festival brings over a quarter of a million people to Galway as the linchpin of the festival season each summer.

The exciting cultural events put on by the festival each year was one of the factors that had National Geographic declare Galway to be one of the best destinations in the world for 2019.

Accepting the award John Crumlish said that that the Galway Arts Festival wouldn’t be possible if not for the dedicated work of countless people.

“Right now there’s six of us, by the time we start there will be 110 people working for the festival, and a thousand volunteers.”

“So, it is a big, big effort rather than just being about me,” he finished.

He also thanked all the private sponsors which help to make the festival happen each year like NUI Galway, Heineken, and Ulster Bank.

“I’m always amazed when we walk into the room and we basically say to them ‘we have the magic beans, all you have to do is give us the cow,” John said.

“And invariably they do, and we’re very, very grateful.”