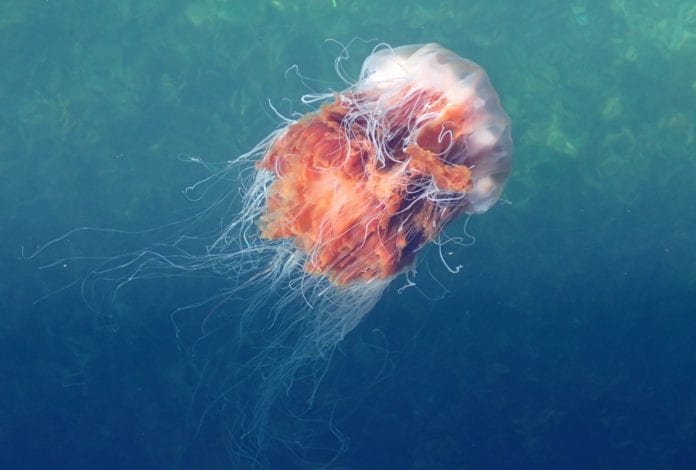 Five people have been hospitalised in recent weeks from lion’s mane jellyfish stings following a huge increase in sightings of the huge jellyfish across Ireland and the UK.

There have been reports of large adult lion’s mane jellyfish in Salthill, Kinvara, Carna and Oranmore in Co. Galway and swimmers are being urged to report sightings to the Big Jellyfish Hunt Facebook page.

Jellyfish research experts from NUI Galway and UCC have issued advice to the public on the best methods to deal with jellyfish stings following the recent events.

The experts say that the best first aid treatment for a lion’s mane sting is to rinse with vinegar (or Sting No More spray) to remove tentacles, and then immerse in 45°C hot water (or apply a heat pack) for 40 minutes.

The lion’s mane jellyfish is a large jellyfish – up to 1 metre – with thousands of long tentacles located beneath the bell.

In Irish and UK waters, lion’s mane jellyfish can be encountered from June until late September.

It is one of the least common jellyfish in Irish and UK waters, typically occurring as single individuals rather than in blooms or aggregations.

Despite this, there has been an increase in the population of lion’s mane jellyfish in recent weeks, and  stings have therefore been a concern.

Jasmine Headlam, PhD and Fullbright Researcher from the Ryan Institute at NUI Galway, said: “We often see lion’s mane jellyfish on the east coast, where the water is cooler, around hotspots like the Forty Foot diving area in Dun Laoghaire and popular beaches like Bettystown, Co. Meath and Clogherhead, Co. Louth.

“In the last few weeks we’ve had reports of large adult lion’s mane from the west coast in places like Salthill, Kinvara, Carna and Oranmore in Galway as well as Newquay in Clare and even Cork harbour.

“We urge sea swimmers and coastal visitors to report any sightings with photographs if possible to the National Biodiversity Data Centre website and the Big Jellyfish Hunt Facebook page.

“Lion’s mane stings, though not generally considered fatal, can cause a lot of pain.

“Stings from large lion’s mane can be particularly dangerous, as the thousands of thin tentacles can each extend to several meters long. Initially, a sting may result in itching or localised pain that may radiate to other areas of the body, potentially progressing to severe pain within 20 minutes or more.

“In some cases, stings can result in Irukandji-like syndrome.

“This syndrome, named after a type of box jellyfish, can involve symptoms including back pain, nausea, abdominal cramps, sweating and hypertension.”