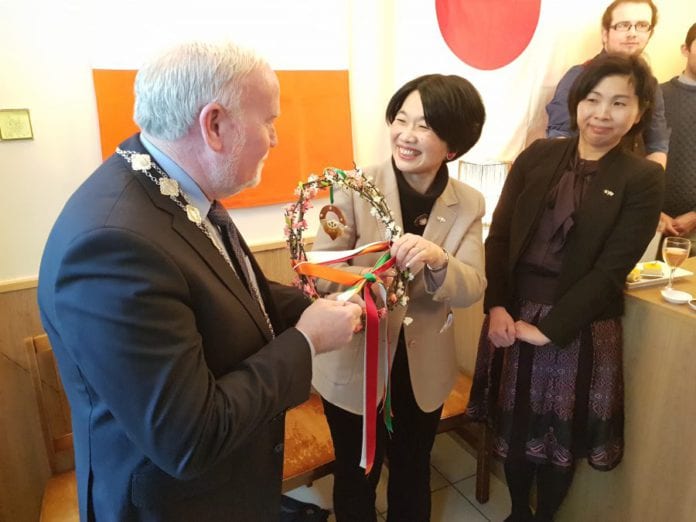 Galway played host to the Japanese Ambassador to Ireland Mari Miyoshi this afternoon down at the Docks.

Ambassador Miyoshi has been attending several events in Galway to promote growing links between Ireland and Japan.

A En-Musubi Gathering, which means “connection tying”, was held at Wa Café earlier this afternoon at the docks.

Galway makes a point of welcoming people from all corners said Councillor Lyons, “If you think, 21 percent of the people living in the city of Galway were born outside of Ireland.”

“It just goes to show the diversity of Galway. We’re a very welcoming city and we always have been. We didn’t get the name the City of Tribes because we were a major port.”

Councillor Lyons apologised that Mayor McNelis couldn’t be present himself.

Mayor McNelis is currently part of delegation to China, councillor Lyons said, and will be out of the country for a spell.

Ambassador Miyoshi opened her address by wishing everyone present a Happy New Year and thanking the people of Ireland for the welcome she has received in her three years here.

This morning the Ambassador stopped by the Akumakon convention of Anime, Manga, and Japanese culture on at NUI Galway this weekend before coming to this gathering.

“I hope many more Irish people visit Japan over the next two years,” said Ambassador Miyoshi.

She added that, “Galway is one of the most attractive and popular destinations for Japenese tourists in Ireland,” and that it would be even more so during Galway 2020 as a Capital of Culture.

Siobhán O’Malley, Cultural Producer with Galway 2020, added that cultural and artistic ties with Japan will get even stronger next year.

According to Siobhán Irish art and music are becoming incredibly popular in Japan, and its her job to promote those arts in 2020.

Galway 2020 and the EU-Japan Fest will work together “to bring Japanese artists to Galway, but also provide opportunities for Galway artists to go to Japan for residencies that will last beyond 2020.”