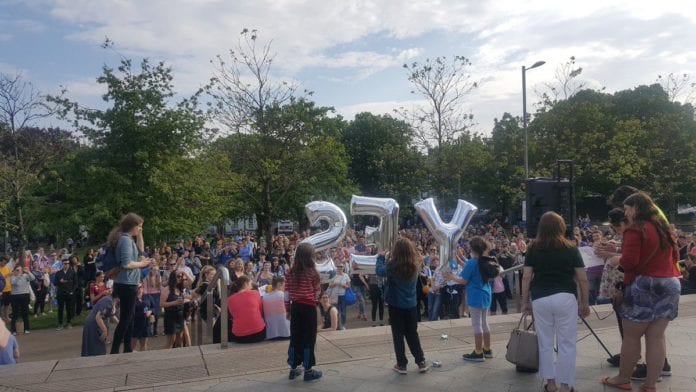 It’s the end of a long and emotional day as Ireland has overwhelmingly chosen to repeal the 8th Amendment to then constitution.

The nationwide result has seen Ireland vote by a two to one margin in favour of repealing the 8th amendment and allowing for provision of abortion by legislation.

All three districts in Galway returned a Yes vote, along with the vast majority of the country. The only constituency which voted No today was Donegal.

The vote showed very strong support for repeal in parts of Connemara and the Islands which surprised those who have heard this debate framed in terms of urban, liberal Ireland pitted against a conservative rural population.

Galway Pro Choice celebrated the events of the day with a gathering in Eyre square this evening that attracted a large crowd.

The gathering ended with a tribute to Savita Halappanvar, who died at University Hospital Galway in 2012 due to complications from her pregnancy.

She presented at UHG with symptoms of a miscarriage but the hospital was unable to carry out a medical abortion due to the foetal heartbeat. She would go on to die from blood sespis. Her child did not survive.

Speaking to the Guardian Savita’s father Andanappa Yalagi said the family were happy with the outcome today.

“We’ve got justice for Savita. What happened to her will not happen to any other family. I have no words to express my gratitude to the people of Ireland at this historic moment.”

The No campaign had largely conceded the vote after exit polls came out on Friday night showing an overwhelming victory for the Yes side.

Commenting on the exit polls ahead of today’s results, Dr. Ruth Cullen of the LoveBoth campaign said that a Yes vote is not about women’s health and will bring about, “an abortion regime that has nothing to do with healthcare and everything to do with abortion on demand.”

Dr. Cullen claimed that many people who voted Yes may only have done so because the government promised very limited circumstances where abortion is allowed, and promised to hold them to that.

“We will hold the Taoiseach to his promise that repeal would only lead to abortion in very restrictive circumstances. He gave his word on this, now he must deliver on it. No doubt many people voted for repeal based on the Taoiseach’s promises in this regard.”

Prominent Pro-life campaigner Cora Sherlock has described today’s vote as a “sad state of affairs” and promised to continue the campaign against abortion.

Today is a sad day for Ireland and for people who believe in genuine human rights. The struggle to defend the most vulnerable has not ended today, it's just changed. Thank you to all the incredible people who worked so hard to protect women and save babies. We fight on. #8thref

Reacting to the vote An Taoiseach Leo Varadkar has described the events of today as a “great act of democracy” and says that he expects legislation to pass the Dáil by the end of the year.

Minster for Health Simon Harris, who campaigned extensively for a Yes vote, has said that he will introduce legislation at the next sitting of the Cabinet on Tuesday.

Yes voters have praised Minister Harris for the time and effort he spent campaigning for repeal.

You have no idea the difference you've made in the lives of Irish women . Thank you and good night.

Minister, I'm not a Fine Gael supporter, nor particularly a fan of politicians, but you have provided courageous and fastidious leadership in helping bring about this long overdue repeal. At least a standing ovation when Dail next sits. #repealthe8th #daileireann #FineGaTwitter