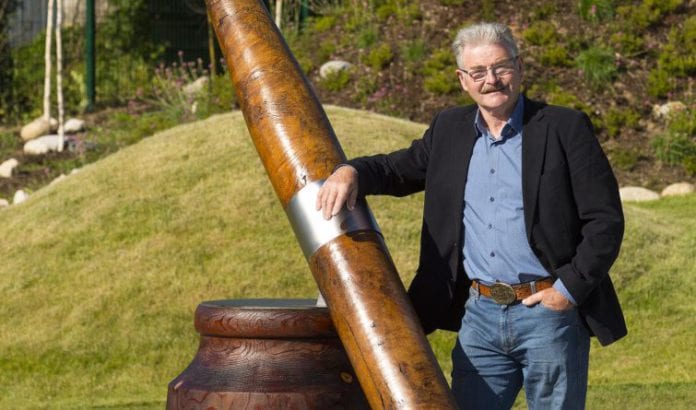 Liam O’Neill from Spiddal is an internationally-renowned wood turner and sculptor who has had works commissioned by some of the most well-known politicians, celebrities and royalty in the world.

But perhaps the most important works he ever created was a wooden bowl which ended up in the hands of the former DUP leader Ian Paisley.

Liam’s journey as a wood turner began in 1968 long before he started experimenting with sculptures in the mid 1990s.

And since then, he has played a significant contribution to the Peace Process in the North at two crucial points of time.

The Spiddal native’s most significant contribution to the peace process came in October 2006, as highlighted in the book The Far Side of Revenge: Making Peace in Northern Ireland.

At this point in time both the British and Irish governments were engaged in intensive talks with Sinn Féin and the Democratic Unionist Party (DUP) to embrace and support a power sharing government.

The talks were described as fractious and hostile, going right down to the wire. It was uncertain whether an agreement was possible given the degree of mistrust between the parties involved.

On the final day of the talks the late Ian Paisley Sr was to leave early as he and his wife Eileen were celebrating their fiftieth wedding anniversary.

At the end of the meeting, Bertie Ahern presented Ian Paisley with a wooden bowl carved by Liam O’Neill from the wood of a fallen walnut tree at the site of the Battle of the Boyne in Co. Meath. 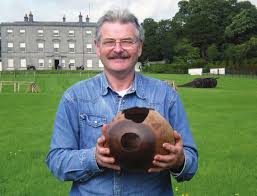 It’s accepted that Ian Paisley was delighted with the gesture and that this would have a gone some way to decreasing the level of distrust between the DUP and the Irish Government.

The gift was so thoughtful that it has been said the then Prime Minister Tony Blair was unhappy with how his own gift to Ian Paisley stood in comparison to the Irish Government’s.

When Paisley was presented with the gift he delightfully quipped that Liam’s wooden bowl was “coming home” with him.

This led to Ian Paisley shaking hands with the Irish Taoiseach Bertie Ahern for the first time ever despite Irish officials being warned in advance by DUP officials that Ian Paisley didn’t want to shake hands.

It has been argued that this showed there was a substantial change of heart from Ian Paisley when he received that gift from the Irish Government.

Shortly after the gift was presented to Ian Paisley Sr, his son Ian Paisley Jr wrote a letter to Bertie Ahern expressing the deep appreciation on behalf of his family for the gesture.

Seven months later on 8 of May 2007 a new Northern Ireland Executive was formed with Ian Paisley as First Minister and the late Martin McGuinness as Deputy First Minister.

The new Executive was formed on the basis of power sharing.

In a meeting with George W. Bush in December of that year, Martin McGuinness informed the press that “up until the 26 March this year, Ian Paisley and I never had a conversation about anything — not even about the weather — and now we have worked very closely together over the last seven months and there’s been no angry words between us. … This shows we are set for a new course.”

Liam O’Neill was contacted by the Paisley family after the veteran politician passed away and was asked to make sculpture dedicated to the former DUP leader.

The sculpture was made out of a tree from the garden of the Paisley family home in east Belfast which coincidentally died at around the same time as Ian Sr.

The sculpture was unveiled in Belfast earlier this year where Bertie Ahern was seen to embrace Ian Paisley Jr with a hug.

If this wasn’t enough of a contribution to the peace process, Liam O’Neill can also be credited with playing his part as far back as 1993.

1993 was a particularly bloody year during the Troubles, and the appetite for peace was growing stronger by the day in response to the increasing frequency of atrocities being committed.

The infamous incidents which scarred the region included the IRA’s Shankill bomb, when a bomb which was being carried by two IRA members prematurely exploded killing 10 people including one of the IRA members.

The IRA were attempting to plant a bomb to assassinate the leadership of the Ulster Defence Association (UDA) who were supposed to be meeting above Fizzell’s fish shop on the Loyalist Shankill Road.

Seven days later members of the UDA entered a crowded pub in a village in Co. Derry during a Halloween party.

The tit-for-tat nature of killing added to an already divided and tense atmosphere.

In the midst of this particularly dark year, Mary Robinson, then President of Ireland, travelled to London to attend a meeting with the Queen at Buckingham Palace.

The meeting was the first official contact between an Irish president and British Monarch, and of course the gift that was presented to Queen Elizabeth by Mary Robinson was a wood vessel made by from an Araucaria tree constructed by none other than Galway’s Liam O’Neill.

It was around that time that the republican movement and the British Government began to engage in regular secret talks with each other with a view to call a ceasefire and enter peace talks.

Liam O’Neill can no doubt be proud of his contribution to the peace process which shows people how art can bring people together even in the most dark and depressing circumstances.

O’Neill has had an art studio in Spiddal since 1992 where his wife Cathy has helped him run his business. He maintains that without his wife’s contribution it would be very hard.

The Spiddal-based wood sculptor was recently speaking to packed room in the Menlo Park Hotel about his contribution to the peace process.

The talk was entitled “Christianity and Art” which was organised by Covenant Christian Fellowship.

Briain Kelly - July 28, 2021 0
Walk-in vaccination clinics will be opening for people to come and get their first dose of vaccine in Galway and Clifden in the next...

Ten days left for charities to apply for Ecclesiastical’s Movement for...