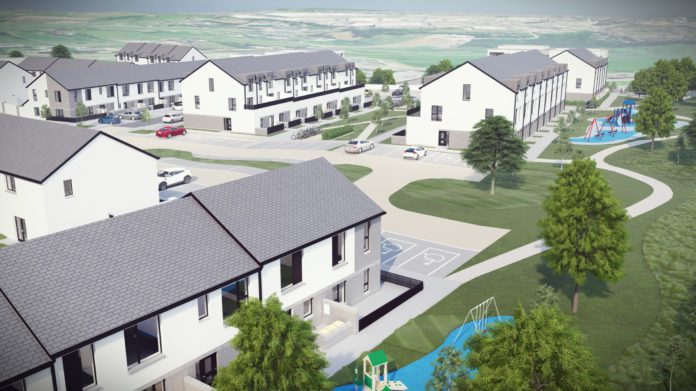 Planning permission is being sought for a residential development of 170 houses and apartments in Galway City.

Plans have been lodged with An Bord Pleanála for a Strategic Housing Development led by Lock House Developments on Bóthar na Chóiste, Castlegar.

The project would first involve the demolition of a house, ruined outbuilding, and a ruined house on the 4.626ha site.

The proposed N6 Galway City Ring Road would be located immediately to the north of the application site, with a designated greenway to the west.

Also in the mix would be two apartment blocks with 17 and 21 units each, totalling 22 one-bed apartments and 16 two-bed apartments, along with 48 duplex units.

A two storey creche able to accommodate 46 children would be built, which would feature an outdoor play area and parking.

Part of the pedestrian and cycling links the developer proposes would include access onto the greenway to the west of the site.

The bulk of the communal green space in the estate will also be located on the western edge of the site, bordering the greenway.

Road widening and other improvements will also be made to a 0.5km section of Bothar na Chóiste.

The estate would be served by a total of 280 car parking spaces, of which 17 would be disabled access, along with 52 electric vehicle charging points, and 417 bicycle parking spaces.

To comply with their Part V planning law obligations, Lock House Developments proposes to transfer 17 homes to the city council for social or affordable housing, 16 apartments and 1 semi-detached house.

An Bord Pleanála is due to make a decision on this planning application by November 28 of this year.

This was one of the last residential developments to be submitted under the now defunct Strategic Housing Development process, which was first created in 2016.

Abandoned this year due to the large number of judicial reviews holding up the supposed fast track planning process, the initial consultation for this application was made to An Bord Pleanála in December of 2021.

Full details and associated documentation for the proposed development can be found at https://botharanchoisteshd.com/.